“I extol Dakshinamurthy, the handsome youth who has transmitted the truth of Parabrahm by silent speech; who is surrounded by a host of venerable sages as disciples, all absorbed and established in meditation upon Brahman; who is the Supreme Teacher; who displays the sacred sign of fusion of the soul with the Absolute — the joining of forefinger and thumb — the paragon of bliss; who has a resplendent face replete with the rapture of the Self-Existent.”

“May this obeisance be directed to the Blessed Dakshinamurti to Him who takes the guise of the auspicious Guru, to Him whose eight-fold Form is this entire motionless and mobile cosmos, manifesting as earth, water, fire, air, ether, the sun, the moon and the soul; beyond whom, all-pervading and supreme, there exists nothing else for those who truly search!”

“Let us Praise Dakshinamurthy, the Supreme Father,
who is ‘having the Opening to Delight’,
who Delights in the Self alone,
who is the Embodiment of Delight,
who is with a Hand (with fingers closed in the fashion of) Sealing in
Brahman (as it were),
who is the pre-eminent among Spiritual Masters abiding surrounded,
by the foremost among spiritual disciples, who are Rishis resting in
Brahman,
who is a small boy,
who is of the Form of the Supreme Brahman, and
who denoted (the Supreme Brahman) by the Expounding that is Silence.”

“A young guru, imparting knowledge of Brahman through silence, surrounded by rishis who are firmly established in wisdom.
Teacher of teachers, whose gesture signifies wisdom, whose nature is fullness, smiling, reveling in himself, I worship that Lord Dakshinamurti.
Seated on the ground under the banyan tree, bestowing knowledge to all the rishis who have assembled near him…
teacher of the three worlds, destroyer of the miseries of birth and death, I bow to that Lord.”

Bali….I was amazed that I got through India without getting sick. In my 10 years of 15 trips to India I have managed to get a wide range of illnesses ranging from ordinary bugs to full-on, 105 degree temperatures. I dodged the bullet this trip! I was amazed! I jumped on the plane to Bali and patted myself on the back. Well done Kyle!

After arriving in Bali I sat down to a nice dinner at a respectable restaurant then quietly went to sleep that night. I awoke at 5am with an acrobat in my stomach. Yup, sick off the first meal I ate in Bali! That is what I get for counting my blessings to early! I spent the next day going through the lava stone workshops of my friend Christian, looking for quality Buddha statues that his family has been producing in Bali for the past 20 years. He consistently has the best quality Buddha carvings as well the best coloring for the statues. His artists can produce any color or texture in the stone. Each year I have seen a consistent improvement in the statues. 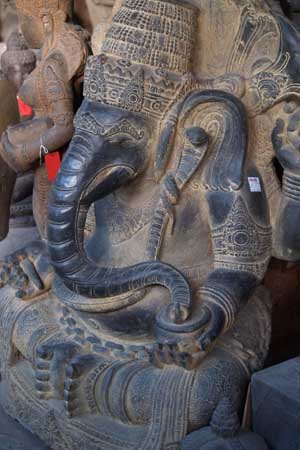 On previous trips I have always shied away from Bali style Ganesha statues.  I was so used to the refined lifelike appearance of Ganesh in my travels through India, that the more crude Ganeshas of Bali did not seem attractive to me.  However, this year I opened my eyes and really saw the Bali style Ganesh for the first time and I liked what I saw.  There is a quote that I love about Ganesh;  “If you take home a stone and worship it in full faith, over a course of time you are bound to see the image of Ganesh.”  I truly saw Ganesh in the stone!  His fat almost tribal qualities are a perfect variation to the Indian style Ganesh.  As usual I bought too many of them!  I can never say no to a good statue!  In roaming thru his workshop I was consistently fighting back the desire to sit down and go to sleep or just fall over.  But I made it through the day…then on to Ubud, the cultural center of Bali to visit my Buddha wood carvers!

My favorite days in Bali are spent on my rented motor scooter cruising through the markets, stores and back village workshops in Ubud. I must go into 30-40 shops a day. It is not easy to find quality wood Buddhas in Bali. There are hundreds of shops selling wood Buddhas however, over the years I have only found a small handful of artists who actually carve with true feeling for the work they are doing. Two artist that consistently make beautiful Buddhas are Mr Sayub and Mr Wayan. Wayan and his son carve my large standing Buddha statues on a blooming lotus base. This year he has carved two of them for me. One 8 feet tall and the other 6 feet tall. The detail and time taken on the flowing robes of the Buddha set his Buddha apart from other standing Buddhas!

My other artist who I always look forward to seeing is Sayub. He makes small Buddha statues each usually with a very unique hand position. The thin fingers of each statue and minute detailing in the robes in my opinion crown him the current king of Balinese wood work…at least for Buddha statues! I also managed to pick up some very large wood statues including a 7 foot Kwan yin, 8 foot meditating Buddha and two other 7 foot standing Buddhas. After a couple of days of searching for Buddhas and cruising through rice fields on my scooter it was time to return to the coast. 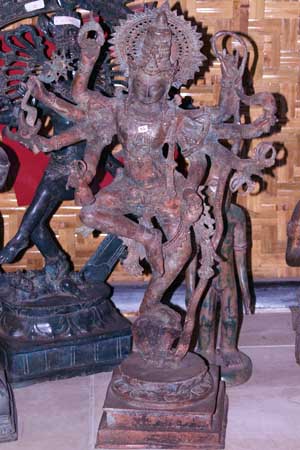 I noticed in the shops in Ubud that there was some new metal work in Bali and I was determined to find out where they were being made. The statues were of Hindu gods and goddesses in various forms. The style was more similar in style to Cambodian Hindu and Buddhist statues with many arms and small weapons. I thus headed into Denpasar, the capital to check the markets. I knew I would not find the source here but I did find many shops that were selling the statues I was looking for. After many questions to many dealers I finally nailed down the source of the metal Hindu statues which I went to the following day. My search was rewarded and I choose some beautiful images. My favorite being a dancing Vishnu statue like no other I have seen before. The statue reminded me more of a Nataraja figure. I find it so fulfilling to start on a search for new sculpture mediums and designs and then achieve my goal. There is nothing like finding new artists!!!

By this time in my trip I really needed a reward. I spent the past 23 days working, flying, scooting, exploring every day and deserved a day off. I went to the quite surf beach of Padang Padang and got a bungalow on the ocean and spent the next day surfing and enjoying the ocean and stillness. My body and mind appreciated the day of mental tranquility and relaxation! Here is a video I shot from my bungalow. Yes, it was paradise!

Then I was off to Bangkok, Thailand and the last leg of my trip!

Click here to View the Wood Buddha Statues Made in Bali

As a Thai customs formality, Buddha sculptures are restricted to be exported from Thailand. The original law was established to protect Thailand’s ancient religious artifacts and antique Buddha images from being stolen and sold illegally. Until recently, this law was not actively enforced on newly made Buddha statues. Vendors could easily ship Thai Buddhas throughout the world.

In November 2010, Lotus Sculpture experienced one of our containers filled with Buddha sculptures being confiscated en route to the USA by Thai customs officials. It was a complete loss with no way to get the confiscated sculptures back.    The USA’s Patriot Act has paid for a large X-Ray machines to examine every container shipped from Bangkok to the US. When US or Thai officials scan a container and see outlines of Buddha statues they now confiscate the contents of the container. This may lead to an end of importing Thai Buddhist images altogether, which would be a tragedy to all involved; Buddhists who worship Lord Buddha; business who sell Buddha statues; and especially for the artists who rely on selling Buddhist art to earn a living.

“Because of the durability of the metal not much is needed to maintain a bronze sculpture.”

Bronze is an extremely durable metal made from a combination of 5 metals; copper, iron, tin, with minute additions of silver and gold.  This combination is called Panchaloha bronze and is the basis for making the sacred Hindu temple statues of India and the world.  Copper is the most prevalent metal in the alloy.  Copper also gives the metal a softer composition that allows the bronze artisans to carve the details that are prevalent in each piece.    All the South Indian bronze statues Lotus Sculpture carries are Panchaloham and thus suited for any home altar or community temple.

Because of the durability of the metal not much is needed to maintain a bronze sculpture.  Many of our customers purchase a bronze statue and perform daily puja and abhisheka consisting of bathing the Hindu deity in ghee, milk, coconut milk or other liquids.  In this case nothing is needed to keep the statue clean as it will be bathed daily.  If the sculpture is used for “darshan” or simply viewing the sculpture it is best to dust the statue as needed so no dirt collects in the details of the sculpture. For both polished golden bronzes and antique patina bronze statues if you would like the sculpture to shine use a cotton cloth with some coconut oil or other natural oil to wipe down the piece as needed.

Many of our bronze Hindu statues have been placed in outdoor temples.  Bronze’s durability makes it perfect for cold winters and hot summers of any climate.  We suggest you bathe the sculpture every couple of months so that dirt does not collect on the sculpture and then use a cotton cloth with some natural oil to give the statue a shine.  Both indoors and outdoors a bronze statue can be left alone which, overtime, will give the bronze an antique patina.

On some bronze statues you can see small hints of lime green, verde-gris patina.  Some people prize this color for its age others want to remove it.  If you would like to remove the verde-gris use a tooth brush with some coconut oil or other natural oil and lightly go over the verde-gris.  This should remove the unwanted patina from the sculpture.

“If you would like the piece to shine use a cotton cloth with some coconut oil or other natural oil to wipe down the bronze statue.”