Lord Buddha - The Enlightened One

"If we could see the miracle of a single flower clearly, our whole life would change."
~ Buddha ~ 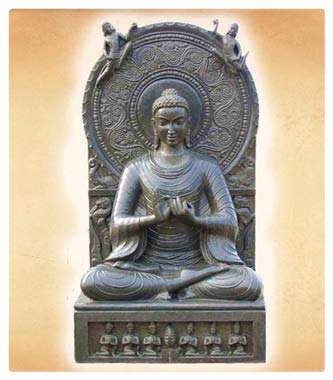 The Buddha, whose original name was Siddhartha Gautama, was the founder of Buddhism, the religion and the philosophical system that produced a great culture throughout much of southern and eastern Asia. Buddha, meaning "awakened one" or "enlightened one" is a title not a name. In Hindu Dogma, the Buddha is viewed as being the 9th avatar of the Hindu god Vishnu.

The Buddha was a son of the rulers Sakyas. He was married at the age of 16 and lived in luxury and comfort sheltered from the harsh realities of life. When he was 29 he realized that men are subject to old age, sickness and death. He became aware of the suffering inherent in existence. He resolved to give up princely life and become a wandering ascetic (samana) in search for the Truth.

With the two of samanas he attained mystical states of elevated consciousness but he failed to find the Truth. He continued his search and was joined by five ascetics in a grove near Uruvela, where he practiced sever austerities and self-mortification for six years. When he fainted away in weakness, he abandoned ascetic practices to seek his own path to Enlightenment. Discarding the teachings of his contemporaries, through meditation he achieved Enlightenment, or ultimate understanding. There after the Buddha instructed his followers in the dharma (truth) and the "Middle Way" a path between worldly life and extremes of self-denial.

The essence of the Buddha's early preaching was said to be the four Noble truths: 1) life is fundamentally disappointment and suffering. 2) suffering is a result of one's desires for pleasure, power, and continued existence; 3) to stop disappointment and suffering on must stop desiring; and 4) the way to stop desiring and thus suffering is the Noble eight fold path - right views, right intention, right speech, right action, right livelihood, right effort, right awareness and right concentration. The realization of the truth of anatman (no eternal self) was taught as essential for the indescribable state of release called nirvana.
By Kyle Tortora, [email protected]

Learn About The Mudras Or The Hand Positions Of The Buddha