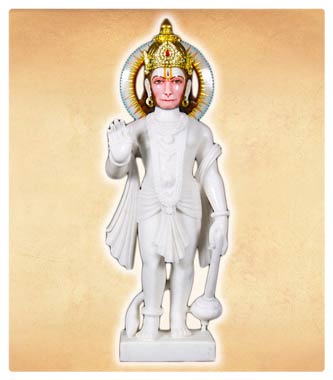 The Hindu God Hanuman is the monkey deity renowned for his courage, power and faithful, selfless service. The Life of Hanuman is related below in the form of short numbered and illustrated accounts of some of the most important parts of his life.

Some say Hanuman was born as the son of the King and Queen of the Monkeys. To others, he is the son of Anjana, an female Apsara who had been transformed into a monkey by a curse, and Vayu, the wind god. It is also said that from his father Vayu Hanuman received the ability to fly.

As soon as Hanuman was born he felt hungry and his mother could not satisfy him. Then he caught sight of the Sun and thinking it was a fruit he leapt after it. The Sun took flight but Hanuman chased him as far as Indra's heaven. Here however, Indra intervened and injured Hanuman's jaw with his thunderbolt.

But his father was quick to avenge him and entered the bodies of all gods and gave them colic. Indra apologized to Vayu and agreed that Hanuman should become immortal. All the gods came together to bless young Hanuman in a cave.

As a young monkey god, Hanuman was quite naughty and abused his powers to pester the saints living in the nearby forest.

Finally all the gods prayed to Brahma to find a solution. Thus a curse was created to protect the world from the mischief that young Hanuman created, by removing his knowledge of his powers.

"Hanuman could easily fight an elephant for example, since he could become much bigger than the elephant at will."

The Power of Hanuman - of which becoming big is just one example - only became available again when Jambavant, King of the bears, remembered Hanuman that he has that power. Hanuman could easily fight an elephant for example, since he could become much bigger than the elephant at will.

At the time of the Ramayana, Hanuman was send as an advance spy to Lanka. To reach the island he had to fly over the sea but there was blocked by Sursa, who wanted to test him. She had a boon that everybody who comes before her must pass through her mouth. However, when she wanted to swallow Hanuman, he became bigger and bigger so she also had to become bigger and bigger. Then Hanuman suddenly became very small and went in through her ear, coming out of her mouth, thus fulfilling the boon.

In the Ashokvatika or forest of Ashoka trees on Lanka, Hanuman spies on Ravana, who is trying in vain to press Sita into becoming his wife. Later he contacted Sita in the gardens of Ravana's palace, told her of the plans being made for her deliverance and gave her Rama's signet ring as a token.

Pleased with his succes, Hanuman fought the demon Meghnaath, son of Ravana, in the gardens of the palace of Lanka. He won over Meghnaath, but was finally captured by Ravana's demons. 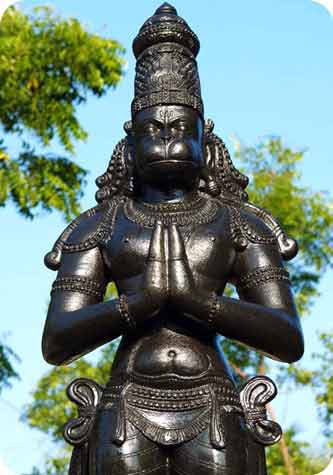 Brought before the demon king, Ravana ordered that while as a messenger of Rama he could not be killed, his tail could be set afire with cloth and oil. But Hanuman used his powers to enlarge his tail indefinitely, untill the demons had no cloth left to cover it. While they still tried to put fire to his tail, Hanuman became suddenly very small and escaped from his ropes.

Trailing his burning tail behind him, Hanuman then set fire to all of Lanka and flew back to the mainland. He rejoined Rama and gave him valuable information on Ravana's forces. The army crossed a bridge to Lanka that was made by another monkey leader and master architect called Nala.

During the mighty battle that followed, Hanuman defeated the Demon Lankini, who was the principal guard of the city of Lanka.

Hanuman's greatest feat during the battle of Lanka however was to bring back the herb that cured Lakshman from a fatal wound. He flew all the way to the Himalayas to find it, harassed by many demons, such as Kalanemi. Because Indra was confusing him, Hanuman could not find the herb and finally brought the entire mountain to Lanka.

Ravana was defeated by Ram; Ram and Sita were crowned King and Queen of Ayodhya. Obviously Hanuman was present, remained Ram's favorite general and continued his life in service to him. When Rama offered him any boon that he cared to name, he asked to live for as long as men spoke of the deeds of Rama.

See All Of Lotus Sculpture's Statues of the Hindu God Hanuman