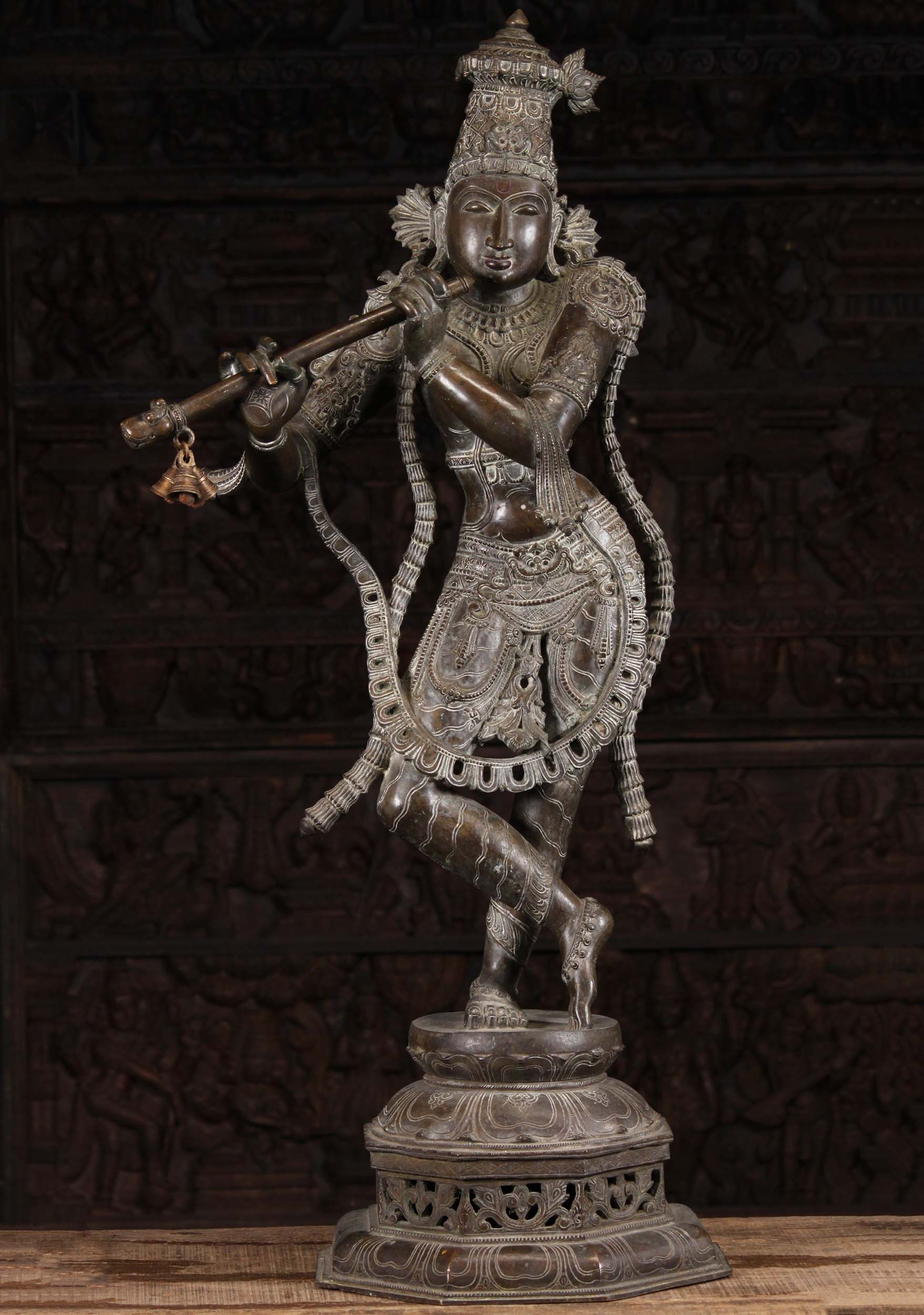 One of the most widely revered and most popular of all Indian divinities is Krishna, worshipped as the eighth incarnation (avatar) of Vishnu. Krishna became the focus of a large number of devotional cults, which over the centuries have produced a wealth of religious poetry, music, painting, and sculpture.

The child Krishna was adored for his mischievous pranks; he also performed many miracles and slew demons.

As a youth, the cowherd Krishna became renown as a lover, the sound of his flute prompting gopis (wives and daughters of the cowherds) to leave their homes to dance ecstatically with him in the forests.

His favorite among the daughters of the cowherders was the beautiful Radha. Krishna's youthful dalliances with the gopis are interpreted as symbolic of the loving interplay between God and the human soul.

Krishna affirms life in his pranks, music, and lovemaking

The rich variety of legends associated with Krishna's life led to an abundance of representation in painting and sculpture. The divine lover (the most common representation) is shown playing the flute, surrounded by adoring gopis.

An excerpt from the Bhagavad-Gita

Why this cowardice in time of crisis, Arjuna? The coward is ignoble, shameful, foreign to the ways of heaven.

Don't yield to impotence! It is unnatural in you! Banish this petty weakness from your heart. Rise to the fight, Arjuna!

Krishna, how can I fight against Bhishma and Drona with arrows when they deserve my worship? It is better in this world to beg for scraps of food than to eat meals smeared with the blood of elders I killed at the height of their power, while their goals were still desires. 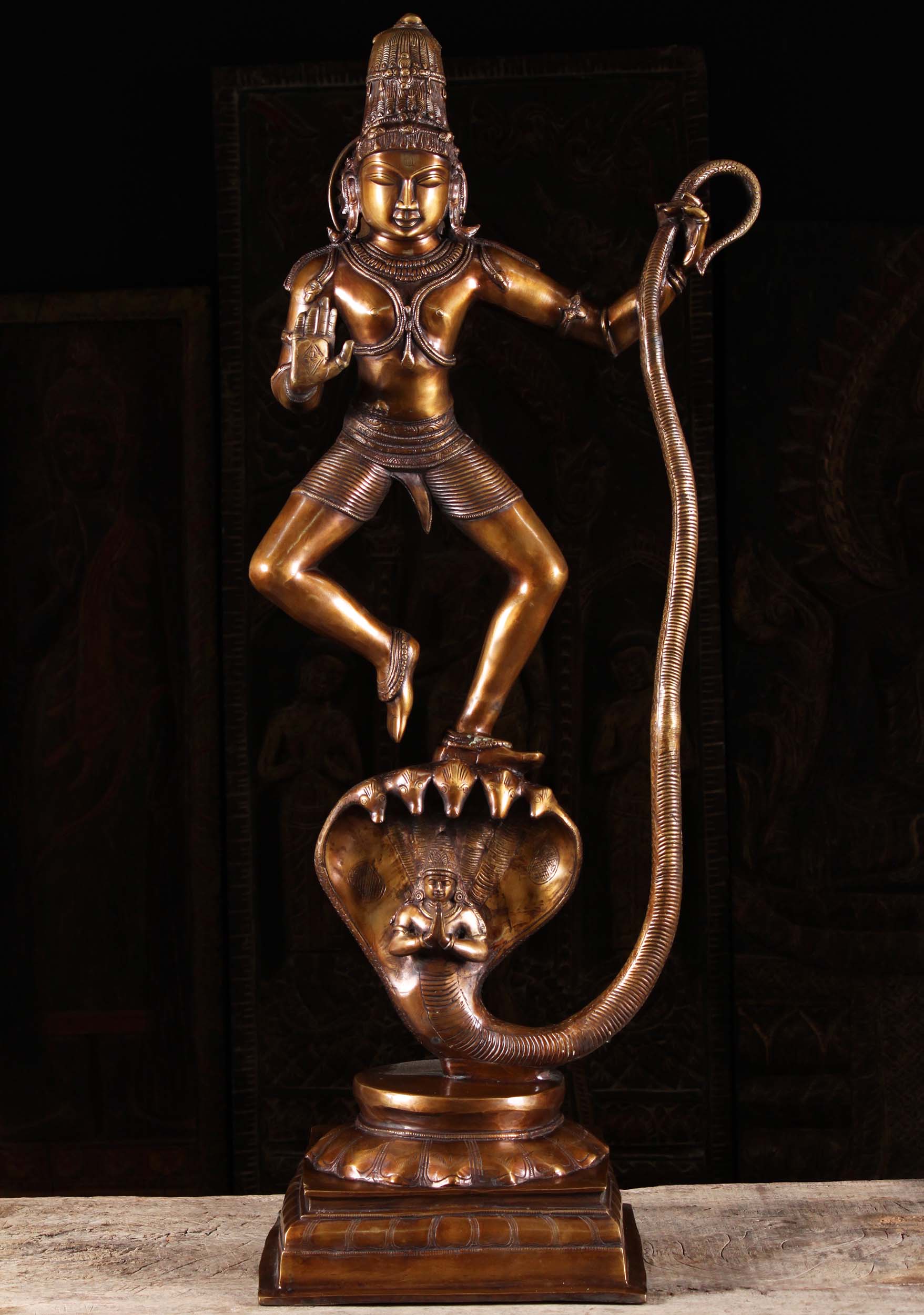 Krishna and the Serpent Kaliya

Lord Krishna came to know that a very large and poisonous serpent had made its home in a lagoon on the Yamuna river. Because the serpent was so poisonous, not only all the fish died, but even the trees and grass surrounding the lake were dying. When birds flew over the area, they immediately dropped dead and fell into the lake, due to the highly poisonous vapors emanating from the water.

In that time, there were many frightful demons, who had all kinds of mystic powers. Lord Krishna had specifically appeared to rid the world of all these disturbing elements. The Lord came to this place with His cowherd boyfriends and decided to confront the king of the snakes. He climbed the large Kadamba tree and from there, jumped into the poisonous waters of the Yamuna.

Lord Krishna then began splashing about and making very loud noises just to disturb the Kaliya serpent. Sure enough, the Kaliya snake came up to the surface to see who was attacking his home. This huge black serpent Kaliya (Kaliya means black) possessed over one hundred hoods, each bedecked with a precious gem. When he breathed, fire emanated from his nostrils.

Kaliya suddenly seized Krishna in his powerful coils, and bound the Lord as tightly as possible. But unfortunately this serpent did not realize that within its coils was the Supreme Personality of Godhead, playing as a child and enjoying His earthly pastimes in the transcendental land of Vrindavana. Without warning, Krishna, the Supreme Mystic, started to expand His body, and Kaliya, who began to feel the incredible pressure, was forced to release the Lord from his deadly coils. Krishnathen jumped on to the hoods of the great serpent and started to dance, stamping His foot down on the heads of the snake demon, Kaliya.

This stamping of Krishna, felt to Kaliya serpent like Indra's thunderbolt striking a mountain. The Lord jumped from one hood to another, and Kaliya felt helpless and bewildered; in anger he spat fire from his many mouths but the Lord was so dexterous that His dancing movements caused the snake to become dizzy. After so many kicks from the Lord, Kaliya started to first vomit blood, and then refuse, before becoming almost unconscious. At that time, the many wives of the Kaliya serpent appeared and begged the Lord with folded hands to spare their husband.

Krishna decided to banish Kaliya to the great ocean never to return again. Thereafter, the giant snake along with his wives, departed forever, and the transcendental Lord rejoined His cowherd boyfriends on the bank of the Yamuna, to continue their wonderful pastimes in the land of Vrindavana.