Less than 10% of bronze statues sold in India to tourists are made using the Lost Wax Method.
The shame is that most of these pieces are sold as Lost Wax cast statues with Lost Wax prices as well."

The purpose of this article is to educate people on the differences between a statue cast mechanically and a statue cast using the lost wax method.

What is a mechanically molded bronze statue?

A mechanically molded bronze statue, is a mass produced bronze statue that is made by a machine. The mold of a particular figure can be used to make repeated castings of sometimes up to 100 statues from a single mold in very little time!

For instance, for a 15" statue, up to 20 mechanically molded pieces can be made in a day with minimal post production filing. Each mechanically molded statue, from start to finish, takes 30 minutes to make. A man made, lost wax statue of the same piece would take a group of artisans up to 3 weeks time to make. First, they must make a model in wax, cover the wax model with 6 layers of molding, manually fire and pour the bronze, then complete the post production filing. This is a staggering difference in time and money.

Because of the amazing difference in investment, many immoral stores both in India and elsewhere find it much more profitable to sell inexpensively made, mechanically manufactured statues, as if they were lost wax method pieces. Education is the consumers best defense against being cheated. You will not become an expert overnight and even the experts sometimes get fooled. Knowing some key differences between the two ways of casting can help you be a more knowledgeable customer while statue shopping.

Time to Make a Statue

Mechanically molded statues are factory made by machines. Post production filing is done only in certain spots of the bronze after the piece is finished. It takes about 30 minutes to finish a 15" mechanically molded piece. Up to 20 pieces can be completed in one day.

Lost wax pieces take a group of artisans anywhere between 14 days to a year, depending on size, to complete a single piece. The artisans don't continually work on one statue the entire time. Many different statues are in different stages of production. A 15" lost wax piece takes 2 weeks to complete compared to 30 minutes for a mechanical mold. 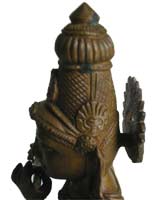 In lost wax pieces the halo usually remains separated from the back of the head of the statue. The exception being with pieces up to 6" tall where the halo is joined.

Molded pieces sometimes carve small circles for eyes. The reason they do this is because all statues used for puja, temple worship, have pupils carved into their eyes. Temple statues are believed by Hindus to actually be a manifestation of the god. In order to actually worship the god at the temple puja you must be "seen" by the god. For this reason temple statues have eyes that can "see". A lost wax piece that is not explicitly made for temple worship will not have pupils carved into it. Only lost wax pieces cast with larger amounts of silver and gold are used for gods in temples. 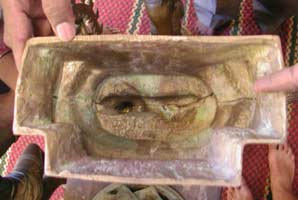 You can see further up into the base of a mechanically molded statue. This would not be possible with a lost wax piece. Lost wax pieces are cast in two separate pieces. The entire body, including arms and legs are cast in one wax mold and the base is separately cast in another wax mold. Afterwards the two pieces are welded together. When you look at the underside of a lost wax statue's base there is a bronze plate marking the beginning of the figure and the end of the base.

The bronze plate always has filing marks on the underside. These marks are due to the filing which occurs after the casting process in order to eliminate any remaining rough edges. 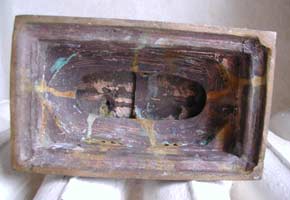 The bronze plate separating the base from the figure of a lost wax statue.

Unfortunately, many mechanical molds now have bronze plates inserted into their bases complete with filing marks to deceive people into believing they are lost wax pieces.

Because the appendages of mechanically molded pieces must be welded on afterwards, you can usually either see the actual welding marks or notice where it has been filed down to hide the weld. 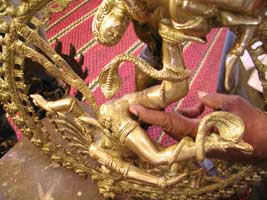 This Nataraja statue has a very obvious weld were its leg was joined to the piece. 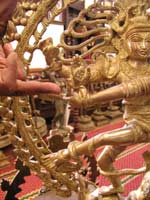 The arm of this piece was welded on incorrectly. The arm, which always points to the foot in the gahahasta (elephant trunk) pose is pointing in the wrong direction. 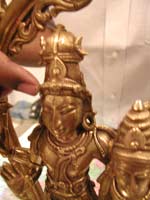 Some key areas to look at are around the ears / earrings of a piece. In mechanically molded statues the areas between the ears and earrings are usually connected by extra bronze. It must then be filed down after the casting to get rid of the excess. Look for filing marks in these areas.

As a general rule, mechanically molded statues lack the detail and overall definition of a lost wax piece. Usually the faces show little or no life and the ornaments show none of the beauty and detail that you would find in a lost wax piece. Expressions are dull and details are glazed over. A good test is to run your fingers over the exposed feet or ornaments of the piece, if it is smooth and lacks any ridges dividing the toes or the jewelry, the piece is either a poorly crafted lost wax piece or it is a molded piece. If there is a distinction in each toe or the jewelry is raised, the piece is either a good mechanical copy or a lost wax piece. 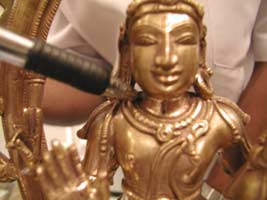 This piece here has been filed around its neck to hide the welding marks left from joining the head to the body. 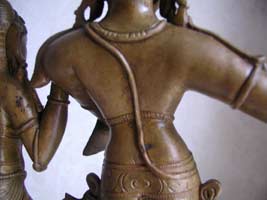 On the back of almost every bronze Hindu statue is a line running from the left shoulder of the piece to the right hip. This thread is called a "Brahmin's thread". It is a piece of thread worn by Brahmins to show that they are indeed Brahmins. 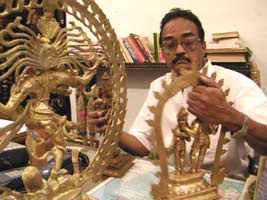 Raja is a friend and trader who deals in Lost Wax cast bronze statues as well as mechanical molded pieces. A dishonest trader sold him the Shiva and Parvati statue (seen in the right of all of the above photographs) saying that it was a lost wax piece and charged him a price associated with a lost wax piece. It was an extremely good mechanical mold with lots of filing done after the piece was cast to make it look like a lost wax piece. Even a fake bronze plate was put in the underside of the base. Only after carefully inspecting the piece and noticing the filing around the neck (pictured above) and the dull details around the crown of Shiva was he able to positively declare that it was a mechanical piece. He has since returned it to the trader and received his money back.

It is extremely difficult to distinguish between the two types of casting without being able to see the statue firsthand. This is especially true with bronze statues that are 12" or smaller. In larger pieces the differences are more obvious. It is very important when you buy statues on the web or at a store that you trust the store you are dealing with.

Lotus Sculpture guarantees that every bronze statue it sells is cast using the lost wax method.