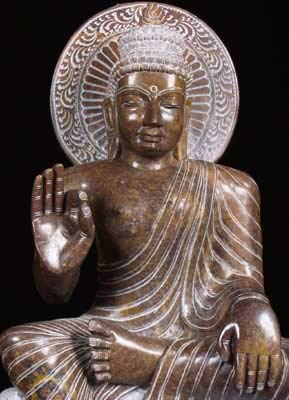 Mudras are a non-verbal modes of communication and self-expression, consisting of hand gestures and finger-postures. They are symbolic signs based finger patterns taking the place, but retaining the efficacy of the spoken word, and are used to evoke in the mind ideas symbolizing divine powers or the deities themselves. The composition of a mudra is based on certain movements of the fingers. They constitute a highly stylized form of body or hand language. It is an external expression of 'inner resolve', suggesting that such non-verbal communications are more powerful than the spoken word.

Many such hand positions were used in the Buddhist sculpture and painting of India, Tibet, China, Korea and Japan. They indicate to the faithful in a simple way the nature and the function of the deities represented. Mudras are thus gestures which symbolize divine manifestation. They are also used by monks in their spiritual exercises of ritual meditation and concentration, and are believed to generate forces that invoke the deity.

A mudra is used not only to illustrate and emphasize the meaning of an esoteric ritual but also it gives significance to a sculptural image, a dance movement, or a meditative pose, intensifying their potency. In its highest form, it is a magical art of symbolical gestures through which the invisible forces may operate on the earthly sphere. It is believed that the sequence itself of such ritual hand postures may have eventually contributed to the development of the mudras of Indian Classical dance.

Another interesting meaning is given to the idea of the mudra. It reveals the secret imbibed in the five fingers. In such an interpretation, each of the fingers, starting with the thumb, is identified with one of the five elements, namely the sky, wind, fire, water, and the earth. Their contact with each other symbolizes the synthesis of these elements, significant because every form in this universe is said to be composed of a unique combination of these elements. This contact between the various elements creates conditions favorable for the presence of the deity at rites performed for securing some desired object or benefit. That is, mudras induce the deity to be near the worshiper.

Dharmachakra in Sanskrit means the 'Wheel of Dharma'. This mudra symbolizes one of the most important moments in the life of Buddha, the occasion when he preached to his companions the first sermon after his Enlightenment in the Deer Park at Sarnath. It thus denotes the setting into motion of the Wheel of the teaching of the Dharma.

In this mudra the thumb and index finger of both hands touch at their tips to form a circle. This circle represents the Wheel of Dharma, or in metaphysical terms, the union of method and wisdom.

The three remaining fingers of the two hands remain extended. These fingers are themselves rich in symbolic significance:

The three extended fingers of the right hand represent the three vehicles of the Buddha's teachings, namely:

The middle finger represents the 'hearers' of the teachings.

The index finger represents the 'realizers' of the teachings.

The little finger represents the Mahayana or 'Great Vehicle'.

The three extended fingers of the left hand symbolize the Three Jewels of Buddhism, namely, the Buddha, the Dharma, and the Sangha.

Significantly, in this mudra, the hands are held in front of the heart, symbolizing that these teachings are straight from the Buddha's heart.


Bhumisparsha Mudra: Earth Touching, Calling the Earth to Witness, or The Victory Over (Subduing) Mara

Literally Bhumisparsha translates into 'touching the earth'. It is more commonly known as the 'earth witness' mudra. This mudra, formed with all five fingers of the right hand extended to touch the ground, symbolizes the Buddha's enlightenment under the bodhi tree, when he summoned the earth goddess, Sthavara, to bear witness to his attainment of enlightenment. The right hand, placed upon the right knee in earth-pressing mudra, and complemented by the left hand-which is held flat in the lap in the dhyana mudra of meditation, symbolizes the union of method and wisdom, samasara and nirvana, and also the realizations of the conventional and ultimate truths. It is in this posture that Shakyamuni overcame the obstructions of Mara while meditating on Truth.

The second Dhyani Buddha Akshobhya is depicted in this mudra. He is believed to transform the delusion of anger into mirror-like wisdom. It is this metamorphosis that the Bhumisparsha mudra helps in bringing about.

This mudra symbolizes charity, compassion and boon-granting. It is the mudra of the accomplishment of the wish to devote oneself to human salvation. It is nearly always made with the left hand, and can be made with the arm hanging naturally at the side of the body, the palm of the open hand facing forward, and the fingers extended.

The five extended fingers in this mudra symbolize the following five perfections:

This mudra is rarely used alone, but usually in combination with another made with the right hand, often the Abhaya mudra (described below). This combination of Abhaya and Varada mudras is called Segan Semui-in or Yogan Semui-in in Japan.

The Dhyana mudra may be made with one or both hands. When made with a single hand the left one is placed in the lap, while the right may be engaged elsewhere. The left hand making the Dhyana mudra in such cases symbolizes the female left-hand principle of wisdom. Ritual objects such as a text, or more commonly an alms bowl symbolizing renunciation, may be placed in the open palm of this left hand.

When made with both hands, the hands are generally held at the level of the stomach or on the thighs. The right hand is placed above the left, with the palms facing upwards, and the fingers extended. In some cases the thumbs of the two hands may touch at the tips, thus forming a mystic triangle. The esoteric sects obviously attribute to this triangle a multitude of meanings, the most important being the identification with the mystic fire that consumes all impurities. This triangle is also said to represent the Three Jewels of Buddhism, mentioned above, namely the Buddha himself, the Good Law and the Sangha.

The Dhyana mudra is the mudra of meditation, of concentration on the Good law, and of the attainment of spiritual perfection. According to tradition, this mudra derives from the one assumed by the Buddha when meditating under the pipal tree before his Enlightenment. This gesture was also adopted since time immemorial, by yogis during their meditation and concentration exercises. It indicates the perfect balance of thought, rest of the senses, and tranquility.

This mudra is displayed by the fourth Dhyani Buddha Amitabha, also known as Amitayus. By meditating on him, the delusion of attachment becomes the wisdom of discernment. The Dhyana mudra helps mortals achieve this transformation.

Abhaya in Sanskrit means fearlessness. Thus this mudra symbolizes protection, peace, and the dispelling of fear. It is made with the right hand raised to shoulder height, the arm crooked, the palm of the hand facing outward, and the fingers upright and joined. The left hand hangs down at the side of the body. In Thailand, and especially in Laos, this mudra is associated with the movement of the walking Buddha (also called 'the Buddha placing his footprint'). It is nearly always used in images showing the Buddha upright, either immobile with the feet joined, or walking.

This mudra, which initially appears to be a natural gesture, was probably used from prehistoric times as a sign of good intentions - the hand raised and unarmed proposes friendship, or at least peace; since antiquity, it was a plain way of showing that you meant no harm since you did not carry any weapon.

Buddhist tradition has an interesting legend behind this mudra:

Devadatta, a cousin of the Buddha, through jealousy caused a schism to be caused among the disciples of Buddha. As Devadatta's pride increased, he attempted to murder the Buddha. One of his schemes involved loosing a rampaging elephant into the Buddha's path. But as the elephant approached him, Buddha displayed the Abhaya mudra, which immediately calmed the animal. Accordingly, it indicates not only the appeasement of the senses, but also the absence of fear.

The Abhaya mudra is displayed by the fifth Dhyani Buddha, Amoghasiddhi. He is also the Lord of Karma in the Buddhist pantheon. Amoghasiddhi helps in overcoming the delusion of jealousy. By meditating on him, the delusion of jealousy is transformed into the wisdom of accomplishment. This transformation is hence the primary function of the Abhaya mudra. But it is not just the divine Buddha who is credited with making mudras. Every position assumed and every gesture performed by our mortal body may be said to imprint its seal on the Ether, and sent forth a continuous stream of vibrations that impress the atmosphere. But to be really effective there must be a deliberate and intended arrangement of the body or parts of the body. Such an arrangement is nothing but the yoga of mudra. It is interpreted as being able to bring the physiological system in harmony with the cosmic forces and so form a magical microcosm through which the macrocosm can be represented, channeled, and utilized. The mudra in all its variations is, therefore, a traditional body pattern; an archetypal posture of performed occult significance.

We perform mudras in every action, every moment of the day. Each action is a symbol of our underlying mental and physical condition and results because of the various energy patterns forming within our being. These patterns determine our personality character and mannerism and expressions. Thus our every moment is an expression of our inner-nature. Consciously performing mudras allow us to become more aware of inner energy and to control it so that we make the most of each moment. The effect is total, at once subtle but powerful. In this way, we learn to integrate our dissipated thoughts and actions, so that life becomes a graceful flow of energy and understanding. Our whole being can then become a mudra, a gesture of life within, reflecting into our external life.