What is Puja? Puja is the act of showing reverence to a god, a spirit, or another aspect of the divine through invocations, prayers, songs, and rituals. An essential part of puja for the Hindu devotee is making a spiritual connection with the divine. Most often that contact is facilitated through an object: an element of nature, a sculpture, a vessel, a painting, or a print. 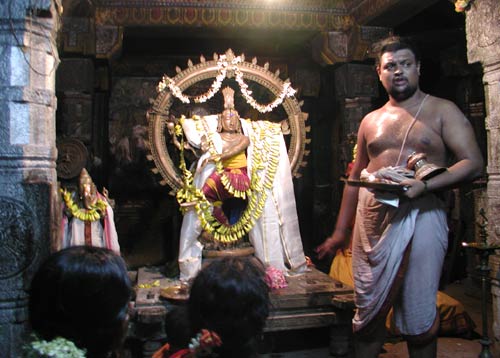 A Brahmin priest along side Nataraja and Ganesha in the Sri Ekambaranathar Temple in Kanchipuram doling out blessings. The temple is a pilgrimage temple for women who wish to have children. It is supposedly the site of Shiva and Parvati's wedding and is therefore renown for its fertility power.

During puja an image or other symbol of the god serves as a means of gaining access to the divine. This icon is not the deity itself; rather, it is believed to be filled with the deity's cosmic energy. It is a focal point for honoring and communicating with the god. For the devout Hindu, the icon's artistic merit is important, but is secondary to its spiritual content. The objects are created as receptacles for spiritual energy that allow the devotee to experience direct communication with his or her gods.

Where is puja held? Hindus commonly conduct pujas in shrines in three different environments: in temples, in the home, and in outdoor public spaces. It is equally common for any of the deities to be worshiped in any of these three types of shrines.

Hindus believe that if proper care is not taken of a temple's images, the deity will abandon the temple. Hence priests reside at the temple and take care of the gods' needs. Priests perform puja at sunrise, noon, sunset, and midnight. For a layperson, however, visiting a temple every day or even regularly is not mandatory, and many devout Hindus worship at home. The essential aspect of puja is not congregational worship but an individual's offering to a deity. Worship in the home usually takes place daily.

Puja in a Temple A Hindu temple is believed to be the earthly seat of a deity and the place where the deity waits for its devotees. As such, temple structures are sacred spaces where gods partake of human offerings and in which the people can be with the gods. Many temples resemble palace architecture; this is not surprising, as deities are often considered kings.

Temples are normally dedicated to one primary god. Often they are elaborately decorated on the outside with stone or plaster carvings depicting religious stories, and their decoration is specific to the deity being worshiped. Mythological scenes are juxtaposed with scenes of everyday life and important political events, such as royal coronations, conquests, and celebrations, or with portraits of royal and secular patrons. These divine images and mythological scenes on the outer walls of the temple help worshipers recall the sacred stories they have heard or read.

One should remove one's shoes before entering a Hindu temple in order to pay appropriate respect to the deity within the temple.

The innermost sanctuary of the temple contains the principal image of the deity. The character of each shrine is determined by the deity being worshiped.

Home worship The heart of every Hindu home is its shrine: the sacred space set apart for honoring and worshiping the gods. While a particularly devout Hindu may visit a temple every day, others go there only to request a favor of the deity, to fulfill specific vows, or on festival days. The pujas that take place in the household shrine are the foundation of all family actions and decisions. Temple worship requires the intervention of a priest, but in the home the contact between devotee and deity is direct.

The size and decoration of a household shrine do not matter. The shrine may be large and impressive, an entire room or a beautifully designed edifice, or it may be simply a tiny niche, or even just a row of religious prints pasted on a wall.

Although children grow up following family beliefs, they are encouraged as young adults to make their own choices of which gods or goddesses they find personally inspiring. Consequently, household shrines contain images of deities that pertain to the belief systems of all a home's inhabitants, and it is not uncommon to find several small individual shrines in one household.

Puja is usually performed by at least one member of the household every day. Puja is a means of honoring the gods or goddesses, whose presence in the home is believed to protect the family and to engender good fortune. The paraphernalia used include an incense burner and a tray with flowers, fruits, and food.

When do Hindus worship?Hindu worship may take place whenever an individual wishes. Worship is usually performed daily at each household shrine by one or more family members on behalf of the whole household. Temple worship is often associated with a particular request being made of the deity, or it may follow the granting of that wish. Festivals to each of the gods take place during the year, and a follower of a certain deity may choose to participate in the ceremonies associated with that deity either at home or in a temple. 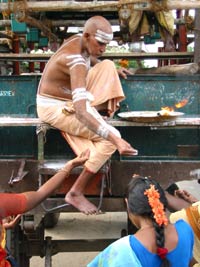 A priest uses a fire to purify ash before dispersing the ash to devotees in front of the Nataraja Temple in Chidambaram. The ash is then spread on the forehead of the devotee.

How is puja celebrated? Wherever puja is performed it includes three important components: the seeing of the deity; puja, or worship, which includes offering flowers, fruits, and foods; and retrieving the blessed food and consuming it. By performing these sacred acts the worshiper creates a relationship with the divine through his or her emotions and senses.

During a household puja, the head of the household chants prayers to the god or goddess. The worshipers offer the deity a seat, wash its feet, and give it water. An image may be symbolically bathed, clothed in new garments, and embellished with ornaments. Perfumes and ointments may be applied, and flowers and garlands may be placed before it. Incense is burned, and a lighted lamp is waved in front of the deity. Foods such as cooked rice, fruit, butter, and sugar are offered. Family members bow before the image, sip the water they have given the god, and receive a portion of cooked food. The food and water are now considered to have been blessed by the deity for the devotees.

At the temple, where the gods are believed to dwell as royalty, puja is usually performed at sunrise, noon, sunset, and midnight. Worshipers may also arrange for a puja to be done by a priest to mark a special event such as a birth or death or to ask for a particular favor.

Puja is a multi-sensory experience. One observes the offering of the lighted lamps, touches the ritual objects and feet of the deity (where possible), hears the ringing of the bells and the sacred chants being recited, smells the incense, and tastes the blessed food offered at the end of the ritual.

How are sculptures incorporated into worship? Hindu sacred sculptures are used to help devotees understand the incomprehensible divinity. These images may be anthropomorphic-that is, having a human likeness-or they may be abstract. Whether made of clay or of gold, all these sculptures are considered equally sacred. Hindu images serve as visual metaphors to express the invisible divine reality.

Although many images of Hindu gods, goddesses, and saints are believed to be always filled with the spirit of the deity they represent, others are bathed and dressed to invite the deity or saint to enter the image temporarily. The bronze sculpture below depicts the saint Sundara and his wife, Parvati, followers of the God Shiva. On the right it is shown dressed as it would be when carried through the streets of a southern Indian city during a religious festival. For most of the year, an image such as this is kept in its own shrine in a large temple. Once a year during an elaborate puja, it is washed with sacred water, then with milk, yogurt, honey, sandalwood paste, and ashes before being dressed in ceremonial robes. It is lavishly adorned with garlands of flowers and may also be decorated with jewelry.

Priests then invoke the spirit of the deity or saint depicted to enter the bronze. For the duration of the ceremony the image is thought to contain the divine being's presence. In an elaborate procession many sacred images are paraded through the streets accompanied by thousands of devotees. Hindus believe that even a glimpse of an image filled with the spirit of the god or saint facilitates a direct visual communication (darshan) with the deity, which will bring blessings to the worshiper. Darshan is a reciprocal act between the worshiper and the deity. Not only does the devotee "see" the deity, but the deity is understood to "see" the worshiper. For this reason, Hindu images often have strikingly large eyes to facilitate this exchange of glances between devotee and deity.

Sundara was an eighth-century follower of the god Shiva whose focused devotion and performance of countless miracles with Shiva's aid were greatly responsible for the spread of the worship of Shiva in southern India. His wife, Parvati, is honored for her steadfast loyalty to both her god and her husband. 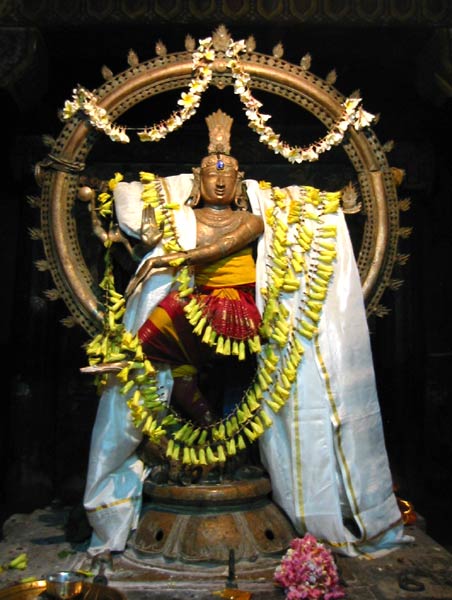 A Nataraja Sculpture completely clothed in the finest silk and adorned with flowers in the Sri Ekambaranathar Temple in Kanchipuram.

All photographs taken by the owner of Lotus Sculpture: Kyle Tortora.