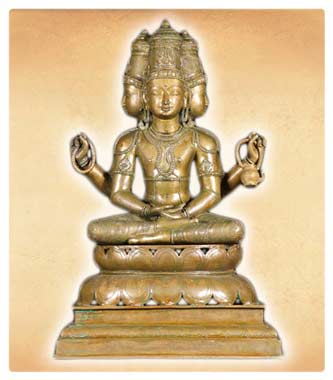 Brahma is the Hindu god of creation and one of the Trimurti. The others two Hindu Gods in the Trimurti are Vishnu and Shiva. Brahmas consort is Saraswati, the goddess of learning.

The Birth of Brahma from the Naval of Vishnu

According to the Puranas, Brahma is a self-born from a lotus flower which grew from the navel of Vishnu at the beginning of the universe. Thus comes one of his names Nabhija (born from the navel). Another legend says that Brahma was born in water. In this he deposited a seed that later became the golden egg. From the golden egg, Brahma, the creator was born, as Hiranyagarbha. The remaining materials of this golden egg expanded into the Brahm-anda or Universe.

Being born in water, Brahma is also called Kanja (born in water). Brahma is said also to be the son of the Supreme Being, Brahman and the female energy known as Prakrti or Maya.

Brahma is traditionally depicted with four heads, four faces and four arms. With each head he continually recites one of the four Vedas. He is often depicted with a white beard, indicating the near eternal nature of his existence. He is shown as having four arms, with none holding a weapon, unlike most other Hindu Gods. One of his hands is shown holding a scepter in the form of a spoon, which is associated with the pouring of holy ghee or oil into a sacrificial pyre - indicating the fact that Brahma is the lord of sacrifices. Another of his hands holds a water-pot (sometimes depicted as a coconut shell containing water). The significance of the water is that it is the initial, all-encompassing ether in which the first element of creation evolved. Brahma also holds a string of malas that he uses to keep track of the Universe's time. He also is shown holding the Vedas, and sometimes, a lotus flower.

Another story in connection with Brahma's four heads is that when Brahma was creating the universe, he made a female deity known as Shatarupa (one with a hundred beautiful forms). Brahma became immediately infatuated. Shatarupa moved in various directions to avoid the gaze of Brahma. But wherever she went, Brahma developed a head. Thus, Brahma developed five heads, one on each side and one above the others.

In order to control Brahma, Shiva cut off the top head. Also, Shiva felt that Shatarupa was Brahma's daughter/son, being created by him. Therefore, Shiva determined, it was wrong for Brahma to become obsessed with her. He directed that there be no proper worship in India for the "unholy" Brahma. Thus, only Vishnu and Shiva continue to be worshipped, while Brahma is almost totally ignored. Ever since the incident, Brahma has been reciting the four Vedas in his attempt at repentance.

The Bhagavata Purana includes a story wherein the Brahma of our universe is called by Krishna to meet with the Brahmas of other worlds, some of which have many more than four heads, counting into the many thousands in some instances for Brahma's in control of universes much larger than our own.

Brahma's vehicle is a divine Swan. This divine bird is bestowed with a virtue called Neera-Ksheera Viveka or the ability to sep, this virtue indicates that one should learn to separate the good from the evil, then accept that which is valuable and discard that which is worthless or evil.