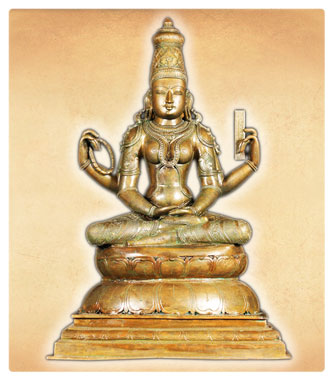 The Vedas are the oldest scriptures of Hinduism and the most ancient religious texts in an Indo-European language. The authority of the Veda as stating the essential truths of Hinduism is still accepted to some extent by all Hindus.

The Veda is the literature of the Aryans who invaded North West India in 1500 B.C. and pertains to the fire sacrifice that constituted their religion. The Vedic hymns were probably first compiled after a period of about 500 years during which the invaders assimilated various native religious ideas. The end of the Vedic period is about 500 B.C. Tradition ascribes the authorship of the hymns to inspired seer-poets (rishis).

Composed according to an advanced poetic technique and complex metrical system, the Veda consists of four types of literature: Samhita, Brahmana, Aranyaka, and Upanishad. Most important are the four Samhitas, which are the basic Vedas. The earliest is the Rig-Veda (rig means stanza of praise), a collection of 1,028 hymns. The Sama-Veda (saman means chant) consists of stanzas taken from the Rig-Veda meant to be sung to fixed melodies. The Yajur-Veda (yajus means sacrificial prayer), compiled a century or two later than the Rig-Veda, contains prose and verse formulas that were to be pronounced by the priest performing the manual part of the sacrifice. These three Vedas were recognized as canonical and called Trayi Vidya (the threefold knowledge).

The Atharva-Veda (atharvan means charm), written at a later period, was included in the canon only after a long struggle. Influenced by popular religion, it included spells and incantations for the practice of magic. Each of these Vedas was taught in different schools, and each school produced commentarial literature. The Brahmanas are prose explanations of the sacrifice, while the Aranyakas, or forest treatises, give instruction for the mental performance of the sacrifice through meditation, thus forming a transition to the Upanishads, works of mysticism and speculation.

The Gods and Vedic Sacrifice

In the Vedic sacrifice a god or gods are invoked by the hymns or mantras. Offerings of food, butter, or soma are prepared and offered to the fire, which as an intermediary god, conveys these to the other gods. The total number of gods is said to be 33, although more than this number are actually mentioned in the Veda. The three main kinds of Vedic gods are celestial, atmospheric, and terrestrial. Their attributes shift, and one god can be identified with another or take on his or her powers.

The most important gods are Agni, the fire god, who plays a central role in the sacrifice, and Indra, the warrior and thunder god, celebrated for his slaying of the drought demon Vritra. Several solar deities are found, including Surya, Savitri, Pushan, and Vishnu. Varuna is the all-seeing god of justice, guardian of the cosmic order or rita. Soma personifies the plant whose intoxicating juice was offered as an oblation.

With the passage of time the sacrifice became increasingly elaborate, and priests became highly skilled specialists. The conception of the sacrifice's meaning also developed. Correlations were made between parts of the sacrifice and of the cosmos. Sacrifice came to be regarded as the fundamental agency of creation, embodied in brahman, the mystical power of speech in the mantras. Theories of cosmogony and the idea of a single underlying reality found clear expression in philosophical hymns and the later interpretive works.