Lord Ganesh - The Remover of Obstacles

"In heaven, Lord Ganesh will establish the predominance of gods, on earth, that of people, in the nether world, that of serpents and anti-gods"
~ A Hymn from Sri Bhagavat-Tathva ~

Click here to view all our joyous Ganesh Statues 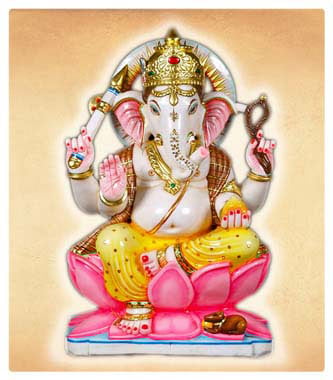 The chubby, gentle, wise, elephant-headed Ganesh, or Ganesha, is one of Hinduisms most popular deities.

Ganesh is the remover of obstacles, the deity whom worshipers first acknowledge when they visit a temple.

Statues of Ganesh can be found in most Indian towns. His image is placed where new houses are to be built; he is honored at the start of a journey or business venture, and poets traditionally invoke him at the start of a book.

Ganesh is also patron of letters and of learning; he is the legendary scribe who, using his commonly held broken tusk, wrote down parts of the Mahabharata Epic.

Ganesh is usually depicted colored red; he is pot bellied, has one tusk broken, and has four arms that may hold a noose called a pasam, an elephant goad, and a pot of rice, or his favorite sweets, laddus. His appetite for these sweets is legendary and offerings of them are often left at his shrine.

A pasam or noose is a triple twine weapon. Each of the three twines represent: 1. Arrogance and conceit, 2. Maya - the illusory nature of the real world, and 3. Ignorance.

Goads (or elephant prods) are typically used to direct elephants. Goads are symbolic of how one should steer the soul away from the ignorance and illusions of this earthly world just as a mahout would steer an elephant away from any treacherous path.

In Hindu ideology weapons are a viewed as symbolic tools to destroy the ego rather than to cause any type of bloodshed.

Ganesh's characteristic pot belly is usually bound around with a cobra. The cobra is an animal usually associated with Shiva, a reminder that Ganesh is his son.

"Ganesh affirms life by celebrating in it's pleasures and beauty."

Click here to view all our joyous Ganesh Statues

Ganesh is usually shown in sculpture accompanied by or riding a rat. Since rats are seen as being capable of gnawing their way through most things, the rat symbolizes Ganesh's ability to destroy every obstacle.

Ganesh's name literally means "Lord of Gana." Ganesh was entrusted by Shiva with the leadership of the Ganas, Shiva's dwarfish, rowdy retinue, in compensation for the loss of his human head. 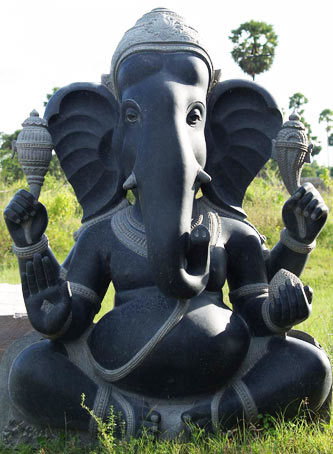 In sculpture the position of Lord Ganesh's trunk has a symbolic meaning. If the trunk turns to the Ganesh's left, that is the direction for success in the world. It is a position associated with grihastas, or householders. To his right, the trunk represents moksha, good for renouncing the world. When one chooses a Ganesh sculpture that is proper for their own spiritual path the trunk position is one thing that is good to keep in mind.

Ganesh is often displayed playing a musical instrument. Much like Krishna, Ganesh affirms life by celebrating in it's pleasures and beauty.

How Ganesh came to have the head of an elephant is explained in various stories. One account of his birth is that Parvati formed him from the rubbings of her body so that he might stand guard at the door while she bathed. When Shiva approached, unaware this was his son, he was enraged at being kept away from his wife and proceeded to lop off the head of Ganesh.

To ease Parvati's grief, Shiva promised to cut off the head of the first living thing he saw and attach it to the body. That creature was an elephant. Ganesh was thus restored to life and rewarded for his courage by being made lord of new beginnings and guardian of entrances. A prayer to Ganesh is invariably accompanied by smashing a coconut, symbolic of smashing the undesirable forces inherent in oneself.
By Kyle Tortora, [email protected]