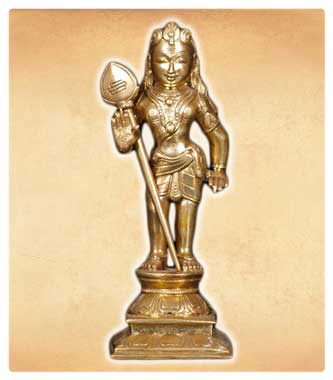 The story of the war god of Hindu Mythology is fascinating for many reasons. He has many nicknames but his most common would be Skanda, although it has been almost forgotten today after having been in worship for over two millennia. Skanda was most popular because of his absorption into the official pantheon as opposed to his previous folk status, and the sudden decline in his all-India popularity to once again being a local area god are all typical stages of this sheltering process.

As far as Indian history goes, Skanda began his existence basically from the beginning. He was a popular war god who lived on forested hills, was fond of hunting, fighting, and an appetite for blood sacrifices. He was young, handsome and a fire-eating, spear-wielding bravo. This basic template went by many names in different parts of the country. In Maharashtra he was called Khandoba and in vast areas of the south of India the god was known as Malai Kilavan, the Lord of the hills in ancient Tamil. His other name was Murugan. This is the name that he is most recognized as today in places of worship.

The Indologist Hardy had a theory that Murugan worship under different names was popular in the folk religion of the North of India too. He was supported in this by Parpola who spent a long time attempting to decipher the script of the Indus valley. Parpola came to the conclusion that Murugan was a deity of the Indus valley culture and that the very name Murugan is to be found in the language. While this is not a popularly accepted view, the reason it could be put forward is the uncontested antiquity of Skanda worship. If the Indus civilization theory proves true, then Skandais at least five thousand years old. In Maharashtra the assimilative forces of High Culture could not force Khandoba out so easily and he remained an independent god, although he is recognized as an avatar of Shiva.

It is interesting that most of the myths of Skanda deal with the vexed question of his parentage. No other figure in mythology has so many claimants for that status. Success indeed has many fathers, and in Skanda's case mothers too - eight in the most popular version the origin story! The many claimants for his parentage indicate his immense importance for rival sects who needed the hill warrior's popularity to bolster their numbers. The Ganapati worshippers alone took an antagonistic stand when it was their time to bask in the sun, they never could forgive Skanda his head start in popularity. The Jains and Buddhists had no stories about Skanda as they did about the Vedic deities; he was too violent for them. The Mahabharata seems to have the first version of his origin though the Ramayana has a little section that covers familiar ground too. 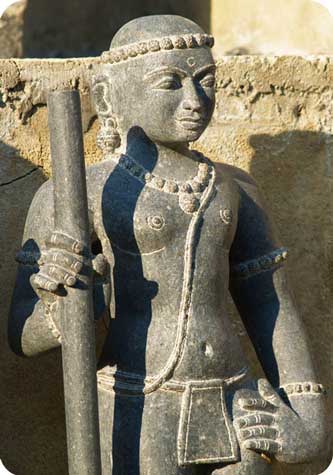 With time Skanda worship began to trial off and it is only in Tamil Nadu that he has any significant presence. The most important temple there is on the shores of the sea and is called Tirucchentur. Other temples lie scattered about the state too and in the rest of South India. This retreat of Skanda from the other quarters of India into the south is documented in the myth that says he was infuriated with his parents for preferring his younger brother Ganapati when it came to who should get married first.

A contest designed to solve this issue came to naught - for Skanda made the trip around the universe physically while Ganapati merely went around his parents stating that they are the world. At a metaphysical level he was right but Skanda went off in a rage that has still not abated. In many south Indian temples they have an annual ritual where his Himalayan dwelling parents come to visit their still sulking son! The myth also accurately potrays an increasing Indian preference for Ganapati, something that shows no sign of receding as yet.

Skanda rides a peacock called Paravani. His preferred weapon is the Vel or spear hence the popular name Velayudhan - he whose weapon is a spear. He is called Yuddharanga or the wisdom of war too. He is represented with six heads and twelve hands. He is popularly known as Subramaniam too which is a common South Indian name.