Shiva Nataraja - The Lord of Dance 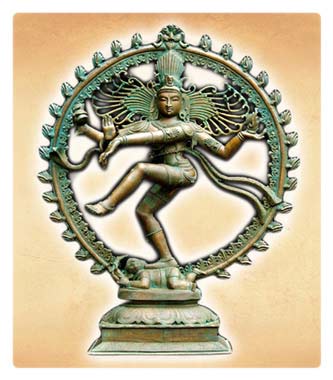 The significance of the Nataraja (Nataraj) sculpture is said to be that Shiva is shown as the source of all movement within the cosmos, represented by the arch of flames.

The purpose of the dance is to release men from illusion of the idea of the "self" and of the physical world. The cosmic dance was performed in Chidambaram in South India, called the center of the universe by some Hindus. The gestures of the dance represent Shiva's five activities, creation (symbolized by the drum), protection (by the "fear not" hand gesture), destruction (by the fire), embodiment (by the foot planted on the ground), and release (by the foot held aloft).

As Nataraja (Sanskrit: Lord of Dance) Shiva represents apocalypse and creation as he dances away the illusory world of Maya transforming it into power and enlightenment.

The symbolism of Siva Nataraja is religion, art and science merged as one. In God's endless dance of creation, preservation, destruction, and paired graces is hidden a deep understanding of our universe. Aum Namah Sivaya.

Bhashya Nataraja, the King of Dance, has four arms. The upper right hand holds the drum from which creation issues forth. The lower right hand is raised in blessing, betokening preservation. The upper left hand holds a flame, which is destruction, the dissolution of form. The right leg, representing obscuring grace, stands upon Apasmarapurusha, a soul temporarily earth-bound by its own sloth, confusion and forgetfulness. The uplifted left leg is revealing grace, which releases the mature soul from bondage. The lower left hand gestures toward that holy foot in assurance that Siva's grace is the refuge for everyone, the way to liberation. The circle of fire represents the cosmos and especially consciousness. The all-devouring form looming above is Mahakala, "Great Time." The cobra around Nataraja's waist is kundalini shakti, the soul-impelling cosmic power resident within all.

Nataraja's dance is not just a symbol. It is taking place within each of us, at the atomic level, this very moment. The Agamas proclaim, "The birth of the world, its maintenance, its destruction, the soul's obscuration and liberation are the five acts of His dance."

The Symbolism of the Nataraja Pose

"O my Lord, Thy hand holding the sacred drum has made and ordered the heavens and earth and other worlds and innumerable souls. Thy lifted hand protects both the conscious and unconscious order of thy creation. All these worlds are transformed by Thy hand bearing fire. Thy sacred foot, planted on the ground, gives an abode to the tired soul struggling in the toils of causality. It is Thy lifted foot that grants eternal bliss to those that approach Thee. These Five-Actions are indeed Thy Handiwork."
~ Chidambara Mummani Kovai ~ 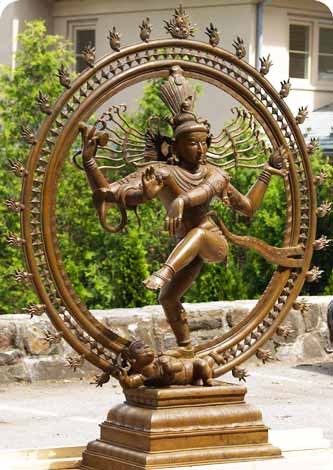 The Nataraja dances within the universe of illusion. The locks of his hair stand out in many strands as he whirls around in his dancing frenzy. His locks are decked with a crescent moon, a skull, and are interspersed with the sacred river Ganges.

Shiva's unkempt hair, a symbol of a rejection of society, shows him to be an ascetic. This contrasts with his role as a grhastha, or householder, with his wife and family.

The fiery ring surrounding Shiva, prahabhamandala, represents the universe with all its illusion, suffering and pain. The outer edge is fire the inner edge the waters of the oceans. Many Nataraja statues have multiple levels of fire and water.

The goddess of the Ganges is here shown nesting in Shiva's dreadlocks. The river Ganges that flows in Nataraja's hair originally flowed in heaven. When the heavenly Ganges was needed on earth, she was unwilling to fall to earth because she realized that her fall from heaven would be too much for the earth to withstand. Shiva as Nataraja agreed to break the violent power of the sacred Ganga's fall by catching her in his tangled hair, breaking the fall with his hair on its way to the Himalayas and Northern India.

The crescent moon in his matted hair keeps Kama, the god of nightly love, alive. Through the waxing and the waning of the moon, Shiva creates different seasons and rejuvenates life.

Nataraja wears a snake coiled around his upper arms and neck symbolizing the power he has over the most deadly of creatures. Snakes are also used to symbolize the Hindu dogma of reincarnation. Their natural process of molting or shedding their skin is symbolic of the human souls transmigration of bodies from one life to another.

In the back right hand Shiva often holds an hourglass shaped drum or damaru. The drum represents the rhythmic sound to which Nataraja dances and ceaselessly recreates the universe.

The front right hand is in the abhaya-mudra (the "fear not" gesture, made by holding the palm outward with fingers pointing up).

The back left hand carries agni (fire) in a vessel or in his hand. The flames represent the destructive energy with which Nataraja dances at the end of each cosmic age, cleansing sins and removing illusion.

The front left hand is across the chest in the gahahasta (elephant trunk) pose, with the wrist limp and the fingers pointed downward toward the uplifted foot.

His uplifted left foot, grants eternal bliss to those who approach him. The other foot treads firmly upon the dwarf of ignorance, allowing the birth of knowledge.

Nataraja dances above the body of the demon, Apasmara, whom he has killed; in this role he is called Natesa. Apasmara, the dwarf demon, represents the ignorance of teaching that all opposites (for example good and evil) are false.
By Kyle Tortora, [email protected]