Saraswati the Hindu Goddess of Wisdom


Saraswati the goddess of knowledge, who is praised by the wise, who is the wife of the creator, may she reside on the tip of my tongue.

Saraswati, goddess of knowledge and the arts, embodies the wisdom of Devi. She is the river of consciousness that enlivens creation; she is the dawn-goddess whose rays dispel the darkness of ignorance. Without her there is only chaos and confusion. To realize her one must go beyond the pleasures of the senses and rejoice in the serenity of the spirit.

Saraswati wears neither jewels or paints herself with bright colors. The white sari she adorns reflects her essential purity, her rejection of all that is base and materialistic.

She transcends the cravings of the flesh and rejoices in the powers of the mind as the patron of pure wisdom. She embodies all that is pure and sublime in Nature. The four Vedas, books of universal knowledge, were her offspring. Her mount, the swan, personifies pure knowledge and her herald, the peacock, is a symbol of the arts.

Schools and libraries are her temples; books, pens, all tools of the artist and musical instruments are the items used in puja to the enlightening goddess of wisdom. 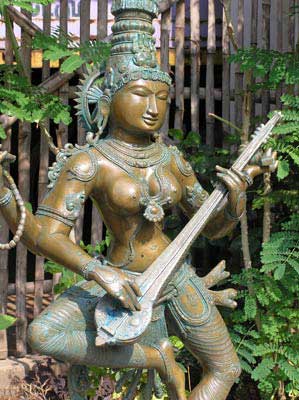 The Birth of Saraswati

In the beginning there was chaos. Everything existed in a formless, fluid state. "How do I bring order to this disorder?" wondered Brahma, the creator. "With Knowledge", said Devi.

Heralded by a peacock, sacred books in one hand and a veena in the other dressed in white Devi emerged from Brahma's mouth riding a swan as the goddess Saraswati.

"Knowledge helps man find possibilities where once he saw problems." Said the goddess. Under her tutelage Brahma acquired the ability to sense, think, comprehend and communicate. He began looking upon chaos with eyes of wisdom and thus saw the beautiful potential that lay therein.

Brahma discovered the melody of mantras in the cacophony of chaos. In his joy he named Saraswati, Vagdevi, goddess of speech and sound.

The sound of mantras filled the universe with vital energy, or prana. Things began to take shape and the cosmos acquired a structure: the sky dotted with stars rose to form the heavens; the sea sank into the abyss below, the earth stood in between.

Gods became lords of the celestial spheres; demons ruled the nether regions, humans walked on earth. The sun rose and set, the moon waxed and waned, the tide flowed and ebbed. Seasons changed, seeds germinated, plants bloomed and withered, animals migrated and reproduced as randomness gave way to the rhythm of life.

Brahma thus became the creator of the world with Saraswati as his wisdom.

Saraswati was the first being to come into Brahma's world. Brahma began to look upon her with eyes of desire. She turned away saying, "All I offer must be used to elevate the spirit, not indulge the senses."

Brahma could not control his amorous thoughts and his infatuation for the lovely goddess grew. He continued to stare at Saraswati. He gave himself four heads facing every direction so that he could always be able to feast his eyes on Saraswati's beauty.

Saraswati moved away from Brahma, first taking the form of a cow. Brahma then followed her as a bull. Saraswati then changed into a mare; Brahma gave chase as a horse. Every time Saraswati turned into a bird or a beast he followed her as the corresponding male equivalent. No matter how hard Brahma tried he could not catch Saraswati in any of her forms.

The goddess with multiple forms came to be known as Shatarupa. She personified material reality, alluring yet fleeting. 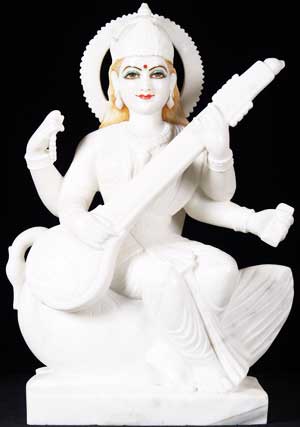 Angered by his display of unbridled passion Saraswati cursed Brahma, "You have filled the world with longing that is the seed of unhappiness. You have fettered the soul in the flesh. You are not worthy of reverence. May there be hardly any temple or festival in your name."

So it came to pass that there are only two temples of Brahma in India; one at Pushkar, Rajistan and the other in Kumbhakonam, Tamil Nadu.

Undaunted by the curse, Brahma continued to cast his lustful looks upon Saraswati. He gave himself a fifth head to enhance his gaze.

Brahma's action motivated by desire confined consciousness and excited the ego. It disturbed the serenity of the cosmos and roused Shiva, the supreme ascetic from his meditation.

Shiva opened his eyes, sensed Saraswati's discomfort and in a fit of rage turned into Bhairava, lord of terror. His eyes were red, his growl menacing. He lunged towards Brahma and with his sharp claws, wretched off Brahma's fifth head. The violence subdued Brahma's passion. Brahma's cut head seared through Bhairava's flesh and clung to his hand sapping him of all his strength and driving him mad. The lord of terror ranted and raved losing control of his senses.

Saraswati, pleased with Bhairava's timely action, rushed to his rescue. With her gentle touch she nursed him like a child, restoring his sanity.

Brahma, sobered by his encounter with the Lord of terror sought an escape from the maze of his own desire. Saraswati revealed to him the doctrine for his own liberation.

Brahma sought to conduct a yagna, fire sacrifice, to cleanse himself and start anew. In order to conduct a yagna ritual the assistance of a wife is needed. Brahma chose Saraswati to be his wife and thus they were reconciled. 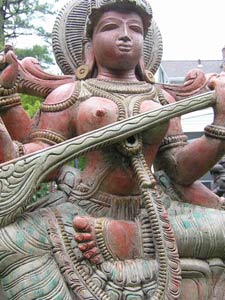 Saraswati, her Veena and the song of the Gandharva

The Gandharvas were demigods who sprang from the fragrance of flowers. Once they stole the Soma plant whose inebriating and invigorating sap was much sought after by the devas. The theft of the Soma infuriated all the gods.

Saraswati promised to recover the soma plant. She went to the garden of the gandharvas and with her veena created enchanting tunes: the ragas and the raginis.

"Give us this music," begged the gandharvas.

"Only if you give back the Soma plant to the devas," said the goddess.

The gandharvas returned the Soma plant and learned how to play music from Saraswati. In time they became celestial musicians whose melodies had more power to rouse the mind than any intoxicant.

A demon practiced many austerities to appease Brahma. The demon sought to conquer the three worlds and the gods feared that he may ask a boon that would make him invincible; the gods sought the help of the goddess Saraswati. The goddess sat on the tongue of the demon so that when it was time to ask for a boon all he could say was, "I would like to never stay awake."

As a result, the demon wanted to conquer the three worlds ended up going to sleep forever. 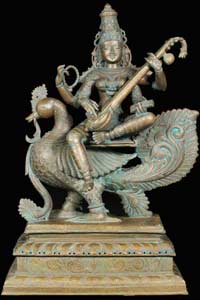 Brahma created the universe with the help of Saraswati. Brahma was the guardian of the cosmos. He too needed Saraswati's support to sustain the cosmos. Using her knowledge he instituted and maintained dharma, sacred laws that ensure stability and growth in society.

Brahma also needed the help of Lakshmi, goddess of wealth, who gave him the wherewithal to ensure cosmic order.

The question arose: who did Brahma need more? Lakshmi or Saraswati? Wealth or knowledge? The goddesses argued, "Knowledge does not fill an empty stomach." Said Lakshmi. "Wealth keeps man alive but gives no meaning to life." Said Saraswati.

"I need both knowledge and wealth to sustain the cosmos. Without knowledge I cannot plan. Without wealth I cannot implement a plan. Wealth sustains life; the arts give value to life. Thus both Lakshmi and Saraswati are needed to live a full life.

Shiva was woken from his meditations and looked around to discover a world on the brink of corruption and being unsalvageable. Shiva decided it was time to wipe the slate clean. Shiva, the destroyer, opened his world destroying third eye attempting to destroy the three worlds.. Out came a terrible fire that threatened all existence.

There was panic everywhere. Saraswati calmly stated, "Do not worry. Shiva's fire burns only that which is impure and corrupt.";

She took the form of a river and with her pure waters picked up the dreaded fire from Shiva Badavagni - the beast of doom.

"So long as the world is pure and man wise, this terrible creature will remain on the bottom of the sea. When wisdom is abandoned and man corrupts the world, Badavagni will emerge and destroy the universe," foretold the wise goddess.