The Hindu Goddess Durga the Unconquerable form of Devi 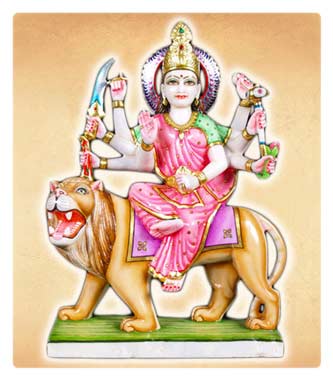 The Hindu Goddess Durga is the most splendid manifestation of Devi. Virginal and sublime, containing within her the power of all the Hindu gods combined, she is the invincible power of Nature who triumphs over those who seek to subjugate her.


Durga and the Buffalo Demon

The buffalo demon, Mahisha stomped across the three worlds, kicking up dust, polluting the earth and sea.

Neither Indra, king of gods, nor Kumara, commander of the celestial armies could stop him. In despair the Hindu gods called on Vishnu for help. Vishnu confronted the demon Mahisha first as Narasimha the man lion and then as Varaha, the boar, but each time he failed to subdue the demon.

Shiva, the supreme ascetic, disturbed by the violence opened his third eye unleashing the fire of doom. Even the power of Shiva's third eye capable of destroying the three worlds could not arrest Mahisha's march.

"Nothing can stop Mahisha now: he will soon control the universe and make Nature dance to his tunes," said Brahma the creator.

"It will never be so, Nature can never be conquered," said Brahma as his divine strength, his shakti, emerged from his body in the form of the goddess Brahmi. She rode a swan and held books of wisdom in her hands.

Simultaneously, the shaktis of the other Hindu gods emerged taking female forms. From Indra, rose Indrani bearing a thunderbolt, riding an elephant, from Kumara rose Kaumari holding a lance and riding a peacock, from Vishnu rose Vaishanavi on an eagle with a discus whirling on her finger, from Varaha came the sharp tusk sow Varahi, from Shiva came Shiavani riding a bull bearing a trident.

The seven shaktis, unrestrained by the bodies of the Hindu gods, were fearsome beings - unbridled, untamed, restless energies of the cosmos. They would not submit to the authority of any man, beast or god, let alone a demon.

They rose to the sky and merged with each other in a blinding light. The sounds of the conchs, drums, and bells filled the air. With bated breath, the gods watched the light. From the heavenly light arose a beautiful goddess. "Who are you?" asked the gods.

"I am Durga, the inaccessible one," replied the goddess. "I am Prakriti, the substance that gives form and identity to all things. I am Shakti, the power that enables all creatures to exist, to feel, think, act and react. I am Maya, the delusion that makes life alluring yet elusive."

"Give me your weapons and I shall destroy he who seeks to dominate me," said the great Hindu goddess.

All the Hindu gods & Hindu goddesses saluted the great Durga. "Give me your weapons and I shall destroy he who seeks to dominate me," said the great goddess.

The goddess acquiesced. Shiva gave his trident, Vishnu his discus and mace, Indra his thunderbolt, Kurmara his lance, Brahma his bow. Then mounting a lion, Durga prepared for battle.

News of Durga, the beautiful goddess who resides upon a mountain, mount Meru, reached Mahisha. "She shall be my queen," declared the buffalo demon. He ordered his two generals, Chanda and Munda, to fetch her.

Chanda and Munda placed the Buffalo Demon's marriage proposal before Durga. Durga did not reply. The demons viewed this as insubordination and threatened Durga. The mighty goddess responded by swinging her sword in one grand sweep she cut off both the generals heads. 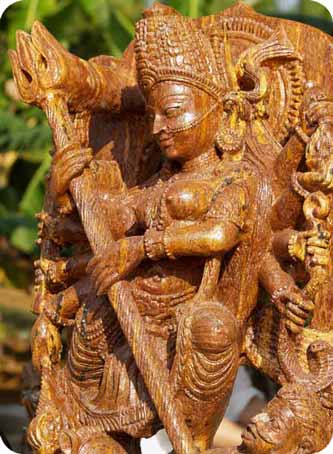 The violent rejection of his marriage proposal enraged Mahisha. "Bring that proud woman before me in chains and I shall show her who is master."

A hundred thousand asuras armed with bows, arrows, spears and swords surrounded Mount Meru, determined to capture Durga. They marched up the mountain, before long a hundred thousand demon heads were seen rolling down Mount Meru smearing its slopes red.

Durga drank the blood of the demons. Seizing a lute and drum she made music to celebrate her victory.

Humiliated by the defeat Mahisha asked, "Why won't you marry me, am I not lord of the three worlds?"

"I shall marry only he who defeats me in battle," revealed the goddess.

"Then let us fight," responded the buffalo demon.

A great battle commenced. Mountains shook, oceans trembled, clouds scattered across the sky, as the buffalo demon attacked Durga. He rushed towards her, sometimes as a buffalo, sometimes as a lion, sometimes as an elephant. The goddess broke the buffalo's horns with her mace, sheared the lion's mane with her lance, cut the elephant's trunk with her sword.

Weapon after weapon, when hurled at the buffalo demon, but each time he managed to rise up undefeated.

Realizing that her weapons had no effect on Mahisha, the Hindu goddess Durga threw them aside, dismounted from her lion and with her bare hands sprang upon Mahisha's back. With her tender feet she kicked his head. The demon, immune to the weapons of all the gods, fell senseless at the touch of Durga's feet.

Durga then raised her trident and plunged it into the buffalo demons heart conquering the unconquerable.
By Kyle Tortora, [email protected]