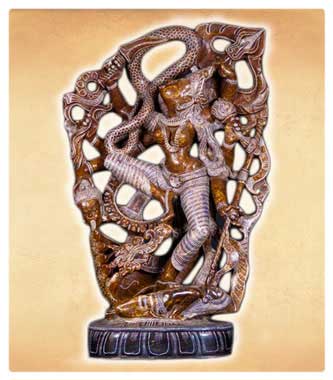 To aid her son in his endeavor to rid the three worlds of the multiplying demon, Raktabija, Parvati entered the cosmic battlefield as the dreaded goddess Kali - dark as death, gaunt with sunken eyes, gaping mouth, with long disheveled hair covering her naked body.

Kali spread her tongue over the battlefield and licked the demon's falling blood, catching it on her long, outstretched tongue before any drop could find it's way to the ground springing a demonic life anew. Raktabija, without his multiplying numbers was left powerless. Skanda was able to dispatch Raktabija and all his remaining duplicates with ease. 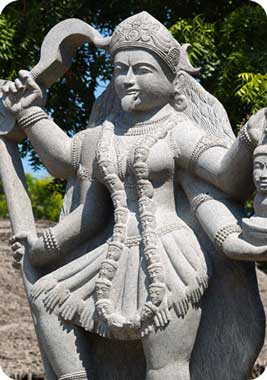 To restrain her, Shiva took the form of a corpse and blocked her path. As the goddess, blinded by bloodlust, she tripped on his lifeless body and was jolted out of her frenzy . She wondered if she had killed her own husband. She placed a foot on Shiva's chest and brought him back to life.