After my arrival one agonizingly hot day in New Delhi I was happily on my way to Kolkata, a city I haven’t been to since my first trip to India in 2002.  I was visiting Kolkata for the sole purpose of meeting a new fiberglass artist Sayak who contacted me earlier this year in the hope of Lotus Sculpture selling his fiber statues.  Upon arriving in Kolkata I was greeted with a solid wave of humidity that I remember all to well from previous trips,  The moisture surrounds you like a blanket, envelopes you and covers every inch of skin with a layer of sweat that won’t leave until you find some AC.  I’ve always loved it!  Thankfully Sayak and two of his friends also greeted me at the airport and we were off to see his workshop and to view some of the pieces I had already ordered from him some months before. 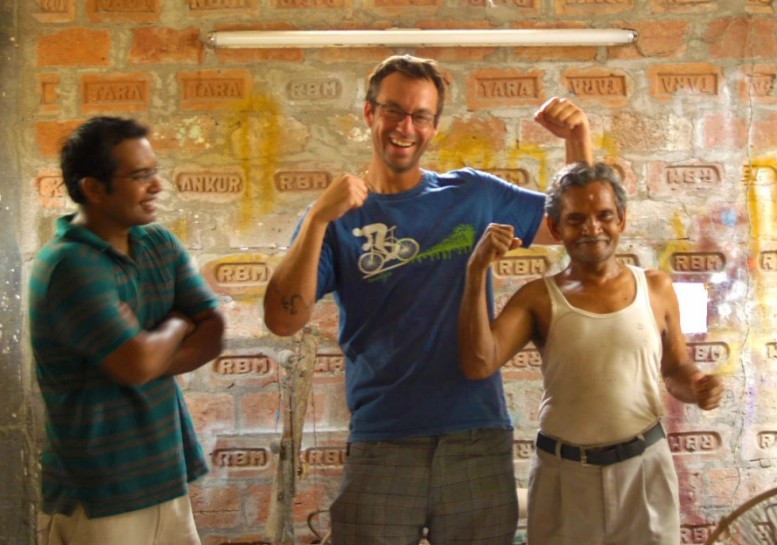 Sayak, his father, Anil and I have a laugh

Sayak was young, only 29 which I always like.  I would rather work with someone who is truly starting out on their artistic journey so that we may grow together and have a special bond with each other years down the road.  His father, Anil I immediately gravitated too.  His one tooth grin was completely disarming and you couldn’t help but want to give him a hug and take him into your heart which happened pretty much immediately.  Anil was a pioneer in creating fiberglass statues.  When he was younger he made clay statues of Hindu Gods.  These statues would easily break and were not of good quality.  In the early 1990’s he helped in a Japanese building project in Kolkata which the Japanese builders needed him to make fiberglass pillars for a building.  His clay molds of the pillars were covered with fiberglass to make a very strong, unbreakable pillar.  He immediately saw the application to his clay statues and after his works were completed with the Japanese he started making fiberglass statues of his models of Hindu Gods rather than clay ones.  The technique has since passed to his son Sayak who carries on the family business today. 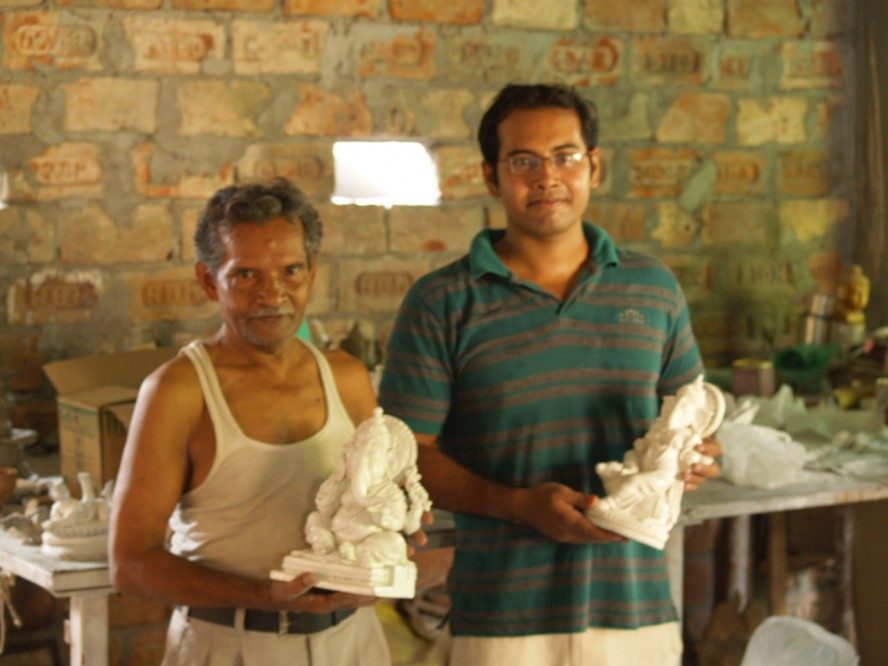 Sayak and his father Sunil are currently making 7 new designs for Lotus Sculpture all under 12 inches tall.  They gave me a detailed description of how the statues are made.  First, the design is brought to life in clay.   Over the past couple of months, Sayak has emailed me many designs of which I was able to adjust the hands and stance until I was happy with how they looked.   After the clay model was agreed upon Sayak would then make the master mold in very hard plaster.  From this master mold, they would make a rubber mold in which the liquid fiberglass would be poured into.  After hardening for an hour the statue would then be peeled out of the rubber mold and a Hindu God is born!  After some sanding and painting the statue is completed and ready for Lotus Sculpture!

After a couple of hours in the workshop, Sayak was anxious to show me Kolkata.  I was anxious myself.  I had fond memories of the city of Kali with its broad tree-lined streets and large colonial English buildings.  We visited the old city center and walked around the markets stopping to refresh and get out of the heat with a fruit shake.  I bought a bag of lychees which I haven’t had in years.  I was addicted to them all over again popping them into my mouth at every stop we took.  We spent a picturesque sunset with my feet wading in the Ganges as I watched adults wash and children swim in her blessed waters.  It was a wonderful day in Kolkata!  A day that started with a 6 AM flight from Delhi and ended with a 10 PM flight to Chennai and the temples of South India which is where I write this now.

I anxiously am looking forward to meeting my friends Balan, Murugan, and Baskaran and seeing their stone and marble creations of which I will tell you about in my next article…

Click here to View the Fiber Statues
Hand Made by Sayak and His Father!