We have just received a new shipment of our hand made, panchaloha, lost wax method, bronze cast in South India as well as brass statues hand crafted in North India. Our stocks were getting low so we are so happy to have more statues to offer you!

They will be posted in the coming weeks and months as we slowly unpack them and post them on the website.

Here are the links to where they will be posted.

If you are searching for something specific please don’t hesitate to email me at [email protected] lotussculpture.com to ask me if we have it. We just may!

Below are some pictures of what we have so far:

A shipment of stone and wood statues has just arrived from Bali. We get about 4 containers a year from Bali but this one was special. I was excited to see the wood wood panels I custom designed in my last trip to Bali. I knew that I wanted to give my wood artists more work and I have been hearing from customers, like you, that you wanted more wood wall panels.

I spoke with my fat and happy Buddha artist, Will, about him carving large Fat and Happy Buddha masks with only the smiling face of the Buddha as a wall hanging. Here they are and they look amazing! The grains of the wood are beautiful and just add life to the joy emanating from the Happy Buddha mask! I am so happy with Will’s work!

Click here to view the Fat and Happy Buddha Masks and all of Mr Will’s work.

I also spoke to a wood artist, Mr Komang, about carving different types of wood panels. He typically only carves trees and flowers for panels but I love his work so I really wanted to work together with him to help him grow so I sent him pictures for ideas about what I would want for Lotus Sculpture. He was very excited and said he could surely carve what I was looking to do. We quickly agreed on the designs and this is the first time I am seeing them. They came out exactly how I envisioned them! I am so happy that I am bringing a new artist into the fold and giving him more work!

We also received about 50 stone statues mostly of the Buddha that will prepare us for the coming Spring season!

You can always view our Garden Buddha Statues here.

Or click here to view our New Arrivals which are posted daily. 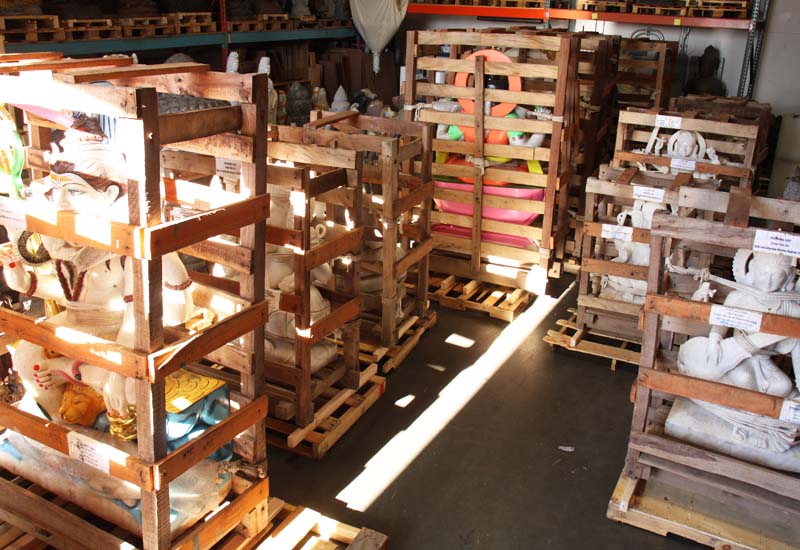 All the crates inside the warehouse 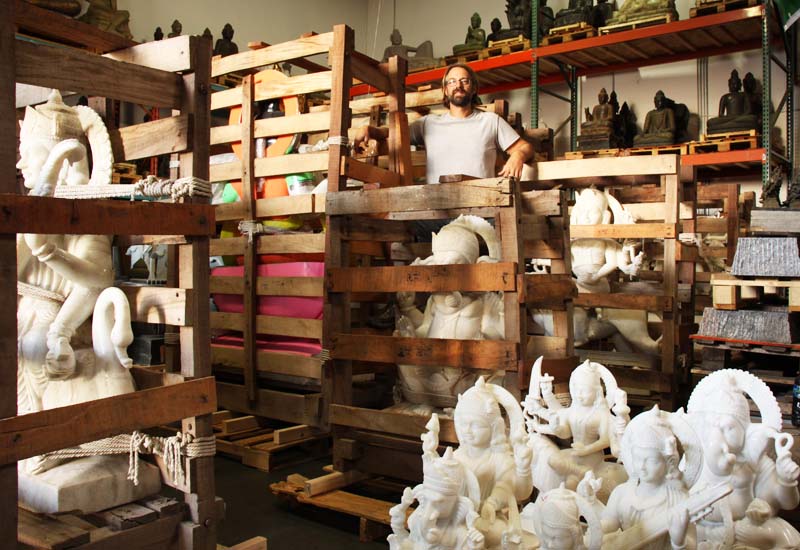 The crates were HUGE! 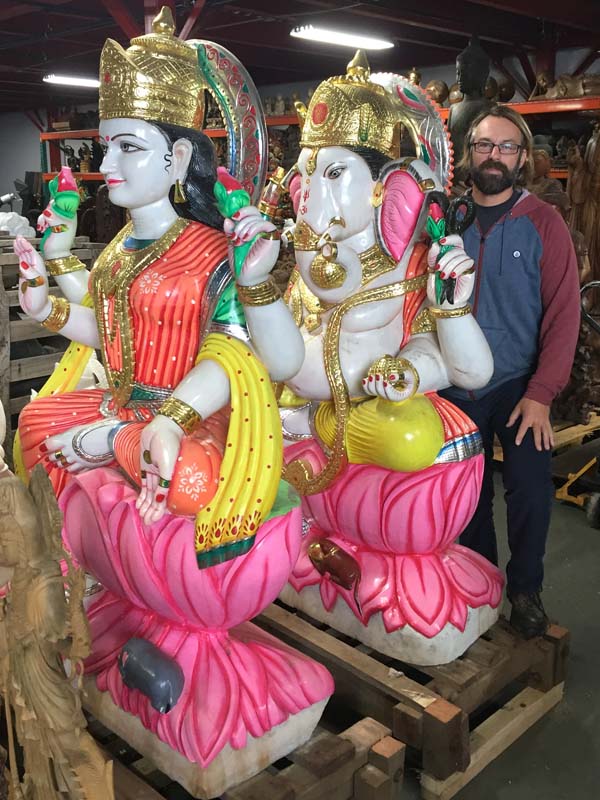 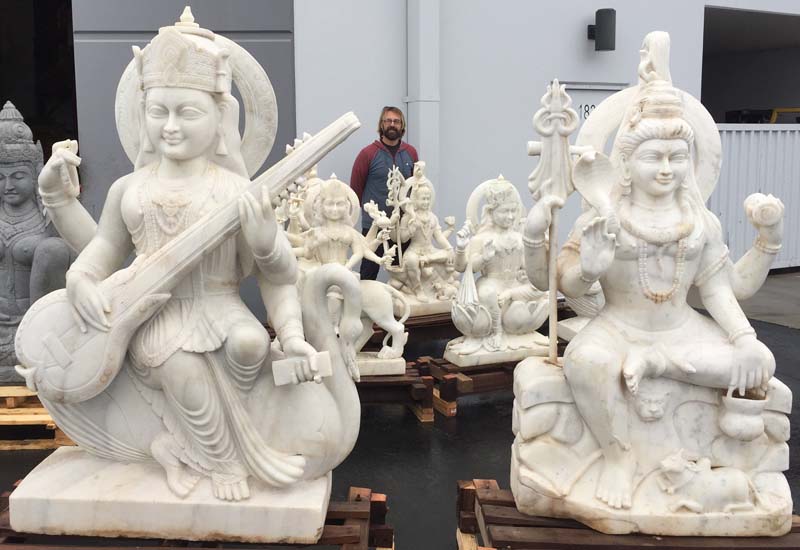 6 foot tall Saraswati and Shiva along with 4 foot tall statues of Durga, Shiva and Lakshmi

You can view all our marble statues from this shipment here, View Marble Statues

Or you can look for these and other new arrivals posted daily in our New Arrivals page.

Our next shipment will be a wood and marble shipment from South India arriving on October 19th!

Vibhuti and Sindur, (or holy ash and kumkum) is found in just about every Hindu household around the world. Men apply what is called a tilak and women apply what is called a bindi. The use of the coloured powder and ash is essential to Hindus and the Indian culture as a whole. They even call the god Shiva as “Digambar”; meaning clad-in-sky or clad in ashes. It is not uncommon to see many priests and monks walking about India covered head-to-toe in ash.

Vibhuti is a very fine white ash substance made from burning a specific kind ofwood during Agamic rituals. Vibhuti plays an extremely special role for the followers of Shiva, unlike the other sects which use primarily kumkum or sandalwood paste. Devotees of Shiva will either have three horizontal lines drawn on their foreheads or they will be covered entirely in ash. The vibhuti is also used during rituals in temples for Shiva.

Sindur, or more commonly called Kumkum, is a red-vermillion shaded powder made from turmeric powder mixed with lime. The acid in the lime causes the orange turmeric powder to turn a rich red when mixed and dried. Sindur plays a much more important role in the lives of women in India as almost all of them will adorn a bindi. Having sindur along the partition of a woman’s hairline indicates that she is married; women who are single simply where a single red dot and the widowed wear no bindi at all.

In temples and many people’s home shrines, vibhuti and sindur are applied to the foreheads and feet of the murtis. Often devotees will touch the sindur covered feet of a murti and then use that sindur to apply a tilak or bindi. The ash & powder are also used in other rituals in which they are liberally applied to smaller statues and the devotees foreheads’. Often, guests at one’s home will have a tilak or bindi applied when they walk through the threshold as in indian culture it is customary to literally treat their guests as though they were a statue in a temple.

If you happen to be interested in purchasing vibhuti or kumkum, Amazon has an amazing selection. Click here to view. Warning, be cautious of any cosmetic products you may purchase, always check the ingredients. 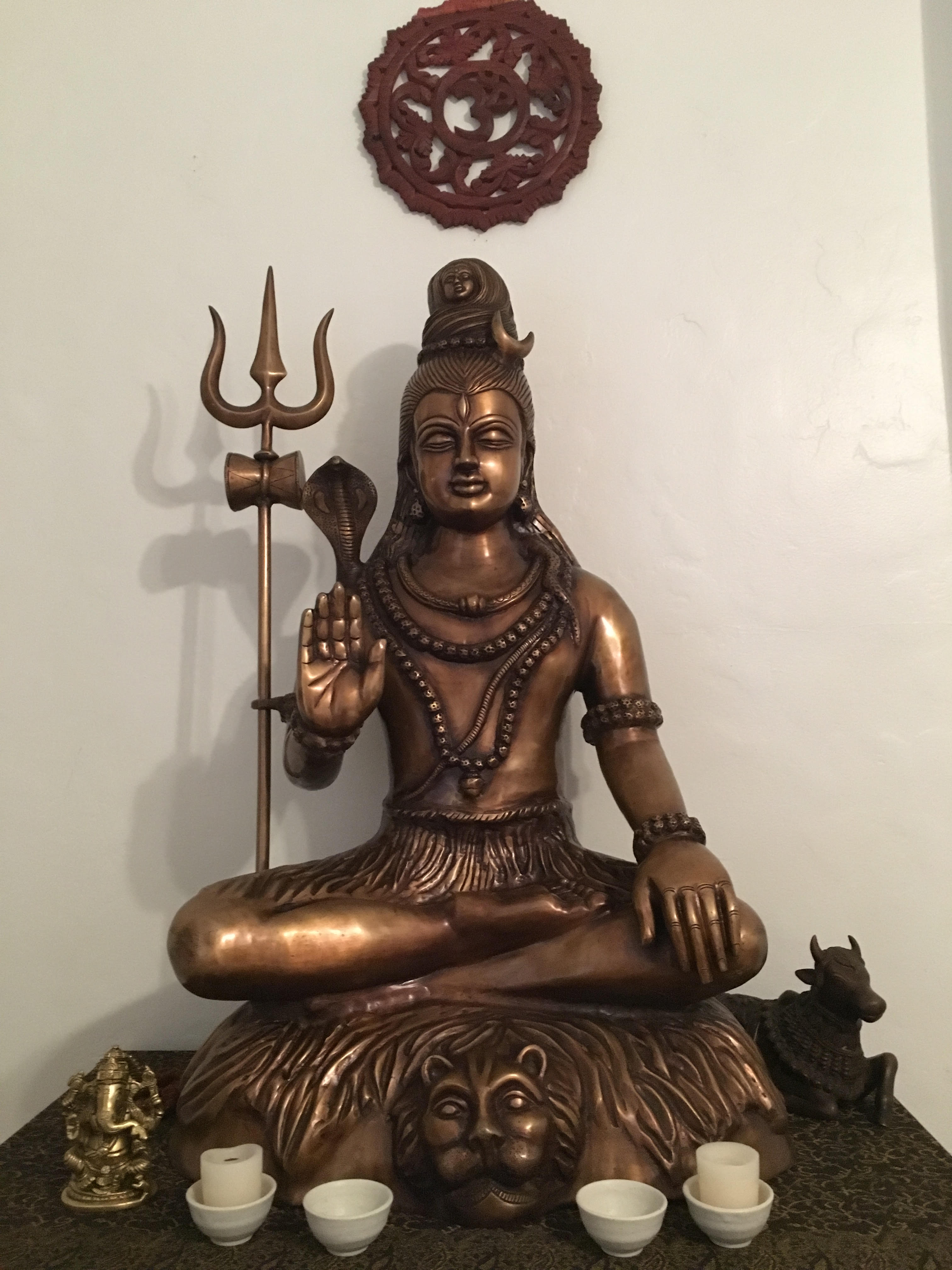 Shiva is the most popular of all Hindu deities.  He is worshiped throughout the Indian subcontinent and greater southeast Asia. He is revered as the lord who is responsible for maintaining the cycle of existence; including its beginning and conclusion. Being the patron deity of yoga & meditation, he is considered to be ultimately formless, omnipresent.  He is the Atman(eternal soul) of the universe itself. In his less abstract depictions, he is depicted as Bholenath, an ascetic yogi who lives in the Himalayas. It is said that lord Shiva grants his followers Moksha(liberation from reincarnation), & eternal happiness and bliss. In this article, one can find some useful vastu & traditional tips and guidelines on Shiva murtis!

Click on the Video below to View the 3 most important Things about placing a Shiva murti in your home.

According to Vastu Shastra(traditional vedic architecture) there are specific places that one should seat the murti in order to reinforce & strengthen the vibrations & energies they give off. It is most ideal to place lord Shiva &|or his Lingam in the northeastern most part of the mandir or whatever space chosen; as is tradition with most murtis. Another reason for this is that it is said lord Shiva & goddess Parvati reside on mount Kailash and that the symbolic placing of Shiva, Ganesh, & Parvati murtis in northeastern corners is done in homage to this myth.

To answer that question simply: yes. Definitely yes. It’s not exactly a shrine to Shiva without his most sacred symbol. The Lingam stone is an abstract representation of the deva and is considered as a literal manifestation of Shiva’s omnipresence & formlessness. There are many myths about the do’s & don’ts of placing lord Shiva in the mandir, and the biggest myth is that you should only keep a single image of Shiva as multiple murtis cause a disruption in the mandir’s vibrations. This is not exactly so. Though Lingas are generally kept somewhat secluded in the mandir, it is not uncommon to have a second murti of Shiva-ji meditating or in his Nataraja(cosmic dance) posture raised on a platform & placed immediately behind the Lingam or adjacent to it.

The general upkeep of Shiva murtis in the home mandir is incredibly important! Thankfully, Shiva isn’t a very difficult deva to appease. Simply make sure the mandir is always clean, offer puja at least once a week, and make sure to meditate in front of the murti daily; once just after waking & again just before bed. The only offerings that are necessary for Shiv puja are water, uncooked rice, flowers, incense, and vibhuti (holy ash). One should also always try to keep a small candle or diya(brass oil lamp) lit next to the Shiva murti|Shiv Lingam; however, this is not absolutely necessary as sometimes it can be a fire hazard. It’s mainly a traditional thing.