Glory to you, O Shiva! Glory to you, O Omkaara! May Brahma, Vishnu and the assembly of other gods, including the great Lord Shiva, relieve me of my afflictions!

As many know, Hindu God Shiva comes in many different forms.  One such popular form is that of Shiva as Harihara, an important integration between Hindu God Shiva and Hindu God Vishnu.  The worship of Shiva as Harihara is an important form as it reiterates to devotees that worship of Shiva, Vishnu, or any of the prominent Hindu Gods is but the worship of every prominent Hindu God, one and the same.  When one worships Shiva, one also worships Vishnu, and all the other important deities collectively in the spirit of divine oneness.  All followers of Hinduism are all looking for one thing, the divine.  When one comes to fully realize this concept, they understand that we are all worshiping the same inherent thing, dharma, just from different approaches.  Both Vishnavites and Shaivities worship Harihara as a form of the one supreme god.

There is often much debate within Hinduism as to the inherent importance of Shiva and Vishnu.  Vishnavites believe that Vishnu is the supreme god, while Shaivities believe Shiva to be the ultimate being.  Conversely others believe that both are equal, manifesting different aspects of the same Supreme Being.   In many cases, however, even if one is preferred over the other, much respect is allotted to the other.

CLICK HERE TO LEARN MORE ABOUT SHIVA AND VISHNU 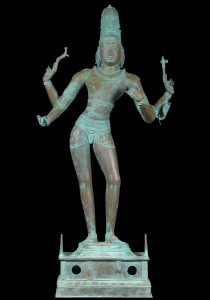 Tripurantaka is a form of Hindu God Shiva, the Destroyer.  As Destroyer of Evil, one of Shiva’s most pronounced legends tells of Shiva destroying 3 mythical cities known as Tripura.

Legend has it an evil demon by the name of Taraka had 3 princely sons. As they grew each served penance to Brahma, the great Creator, in order to get in his good favor.  They gained immense power in the process.  Pleased with them, Brahma bestowed on them each their own city in the sky.  These three fortresses were virtually impenetrable and they were granted life for a thousand years as they lived their lives in their great kingdoms.  Only by an arrow merging the three cities setting them ablaze could they be destroyed.  Armed with this immense power bestowed by Brahma, the three demon sons began to wreak havoc on the universe.   From cliff sides within their great citadels they would taunt and threaten the gods, mounting attacks from the sky.

Seeing no end to their harassment within their virtually impassable cities, the great Hindu Gods went to Shiva for help.  Lord Shiva agreed to help but waited for the perfect moment to strike.  Shiva created a bow, arrow, and chariot from pieces of the gods in order to mount his attack.  As he raced into the sky, Shiva hit the converged cities with a flaming arrow as Brahma steered the divine chariot.  The arrow was created from Hindu God Vishnu, protector and preserver of the universe, destroying the three cities and freeing the gods from the princes reign of torment.  Forgiving as he was, Shiva forgave the repenting princes and gave them each duties within his abode.  Originally Shiva devotees, he recognized their following of an evil path, but forgave them of their sins.  After destroying the cities, Shiva smeared the ashes of the three cities on his forehead.  This has become a widely known symbol of Shiva and devotees smear ash on their foreheads in his honor to this day.

Click here for more info on Shiva, Vishnu, and Brahma.

Durga is a vicious form of Hindu Goddess Devi, known for her indestructible nature.  She is commonly depicted with 18 arms all carrying weapons as she rides atop a fierce tiger. She carries a weapon given to her by each of the Gods including Hindu God Indra’s (God of Destruction) lightning bolt and Hindu God Vishnu’s (The Preserver) Discus.  These weapons are endeared to her as a defender of the world.  She is frequently seen slaying demons especially the buffalo demon known as Mahishasura.  It is said that she was created in order to fight off the incredible might of the asura Mahishasura, who could not be defeated by any male or god alike.  Mahishasura had been reigning incredible terror upon the earth and as the gods became helpless, Hindu God Shiva turned to his wife Parvati for help.  Parvati responded by traveling to an ashram to take on the role as female goddess warrior. The Gods also turned to Brahman, the supreme creator of all gods, for help and together they banned together emitting beams of light from their bodies.  The beam of light expanded to the Ashram where Hindu Godess Parvati had ventured and out of the light Durga was born, a fierce and eager female warrior goddess. She was formed of the female aspects of Brahman just as Shiva had once been formed of Brahmans male counterparts.  The gods were blessed and endeared by her.   As she fought with the revered Mahishasura she exclaimed:

Eventually paralyzed by the blinding light constantly emanating from Durga’s body, the buffalo demon was slain with one swift slice of her sword as she erupted in laughter.

This account of her ferocious stand off and conquering of the buffalo demon is celebrated annually in the national festival Durga Puja, which falls on October 19-24th of 2012.  As an endeared Goddess, Durga’s divine feminine energies are thought to be a manifestation of all the gods.

To learn more about the Hindu Gods CLICK HERE