“You don’t preach Zen. Neither do you learn it.”
~Zen Saying~

Zen Buddhism is a philosophy emphasizing that enlightenment and Nirvana are reached through deep meditation, intuition and spiritual contemplation, rather than ritual worship or study of scriptures. This new version of Buddhism developed into two schools of thought. One Zen belief is that attaining enlightenment is a gradual process, with the help of daily meditation and spiritual devotion. The other Zen notion is that enlightenment comes in an instant; a sudden understanding of one’s existing inner-Buddha. The intrinsic concept of Zen Buddhism is that everyone takes their own individual path to reach spiritual bliss and contentment.
Throughout history, many Zen-masters have emerged to teach students through storytelling with anecdotes based on interpretations of Buddhist perspective. These stories emphasize a spiritual awakening and push the mind into new ways of thinking and reflecting on life. Many Zen stories are inter-woven with Buddhist philosophies, such as the Four Noble Truths and the Eightfold Path.

Lotus Sculpture would like to share a collection of short stories, mostly Zen and Taoist tales, to awaken the spirit and bring peace of mind. The beauty of the simplicity behind the messages can be interpreted in many ways – the lessons you take from them are a reflection of who you are.

Zen Story –Sounds of Silence
Four monks decided to meditate silently without speaking for two weeks. By nightfall on the first day, the candle began to flicker and then went out. The first monk said, “Oh, no! The candle is out.” The second monk said, “Aren’t we not suppose to talk?” The third monk said, “Why must you two break the silence?” The fourth monk laughed and said, “Ha! I’m the only one who didn’t speak.”
“To the mind that is still, the whole universe surrenders.” –Taoist Saying

Zen Story –It Will Pass
A Student went to his meditation teacher and said, “My meditation is horrible! I feel so distracted, or my legs ache, or I’m constantly falling asleep. It’s just horrible!”
“It will pass,” the teacher said matter-of-factly.
A week later, the student came back to his teacher. “My meditation is wonderful! I feel so aware, so peaceful, so alive! It’s just so wonderful!”
“It will pass,” the teacher said matter-of-factly.
”Do not follow the ideas of others, but learn to listen to the voice within yourself.” –Zen Master Dogen

With summer in full swing, it is a pleasant time to enjoy nature and relax in your garden.  A way to enhance and bring tranquility to any environment is to place a Buddha statue, particularly a portrayal of Buddha in a meditative state.  The positive and peaceful energy of a Zen Buddha sculpture helps keep you in balance and harmony.

First, to accentuate your garden, and to create the best possible chi energy, the meditating Buddha should be seated on a pedestal off the ground.  With the lotus throne, or padmasana, this position signifies gratitude and humility.  Typically, the Buddha’s hands lies in his lap, one over the other, with thumb tips touching.  This is known as dhyana mudra of meditation. 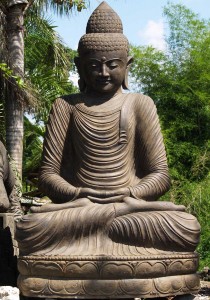 Another step is to plant with odd numbers in your garden to create balance and “yang”.  Yang, which refers to the “sunny side”, is a masculine symbol and reflects the sun and day time.  Since odd numbers are yang, they are considered auspicious, with a multiple of nine bringing the most positive energy.

Most of the large, stone garden Buddha statues at Lotus Sculpture are one-of-a-kind; created by artists in Bali.  They are hand carved from lava stone, which is quarried from the volcanic mountains of Indonesia.  The lava stone is a solid stone that is perfect for any type of location and weather conditions – hot or cold, wet or dry.  The stone is versatile in that it can be colored in a wide spectrum of colors.  It can also be polished or unpolished giving it a clean or rough feel.  In humid conditions, when left untouched, it takes on a very mysterious, antique-look as you would see in the temple ruins of South East Asia.