The Hindu God Ganesha is considered to be the master of wisdom, guardian of knowledge and obstacle remover. All the devotees invoke prayers in favor of Ganesha to bring in positive energy to them and favorable results to their ventures. The Ganesha mantras are also known as Siddhi Mantras. Ganesha is known in different forms and by a number of names, and some of the names are Ganapati, Vignesha, Pillayar, Vinayak, Ekadenta, Lambodara, Gajanana.

Here, are some of the most popular mantras of Lord Ganesha, which are used to please Him.

1. Ganesha Dwaadasha Nama shlokam: This prayer mentions the 12 names of the Lord Ganesha. These verses are believed to be recited by Sage Narada in order to please Lord Ganesha.

Meaning: Salutations to the Lord, who is the son of Gowri, and He who resides deep in the heart of the devotees, blessing them always with good health and prosperity.

Meaning: This stanza marks the beginning of twelve names.

First as the Lord with the curved trunk;

Second as the one with only one tusk,

Third as the one with black (red/brown) eyes,

Fourth as the one with giant structure

Meaning: Fifth, as the one with a big (long) stomach,

Sixth, as the one with a huge body,

Seven, as the remover of obstacles,

Eighth, as the one with smoke gray color

Meaning: Ninth, as the one with moon on the front of His head,

Tenth, as the foremost leader,

Eleventh, as the leader of the ganas,

Twelfth as the one with elephant face

If a person remembers these twelve names of the Lord Ganesha, three times in a day. Then he will have all his obstacles and fear removed and will attain success.

Meaning: You are one tusked, have a huge, massive and a hot-golden colored body. You have a large pot like belly, beautiful eyes. I bow to you the leader of ganas (followers of Lord Shiva)

Meaning: You are the one who is victorious and has the smoke-hued color body and who uses snake as a holy thread that is tied around the belly. The one who has a waxing moon on his head, I bow to you the leader of the ganas.

Meaning: The one who makes a picture perfect pose. He has a garland adorning around his neck and takes the form of Kama Roop. I bow to you the leader of ganas.

Meaning: The one with an elephant face and still considered the best. He is beautifully adorned with karnchamra. He holds Pashan and Kusha, weapons used in war. I bow to the leader of the ganas.

Meaning: The one to whom yaksha, kinnera and gandharva pray. He is the only one who has the vidya to acquire opulence, and whose prayers are sung by people. He who has strong arms, I bow to the leader of the ganas.

Meaning: He is the one who is dear to the mother, who is always ready to serve his mother anytime, who is dear to his devotees and who ends the wars; I bow to the leader of the ganas.

Meaning: He is the Lord who can take care of all our problems, who weakens all the obstacles and problems that comes our way to success and the one who gives all types of Siddhi. I bow to the leader of the ganas.

Meaning: Om –Salutations to the Lord.

Gam — the secret power sound of Ganesh and is known as His bija mantra.

Ganapathi — Another name of Ganesh 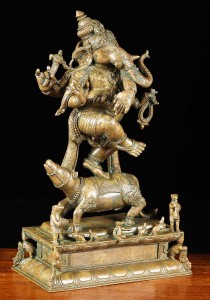 Meaning: We devote our thoughts to the One Tusked Lord. We meditate upon Him who has a Curved trunk and May the tusked one guide us on the right path.