The Hindu God Shiva (Sanskrit: Auspicious One), or Siva, is one of the main Deities of Hinduism, worshiped as the paramount lord by the Saivite sects of India. Shiva is one of the most complex gods of India, embodying seemingly contradictory qualities. He is the destroyer and the restorer, the great ascetic and the symbol of sensuality, the benevolent herdsman of souls and the wrathful avenger.

The Hindu God Shiva was originally known as Rudra, a minor deity addressed only three times in the Rig Veda. He gained importance after absorbing some of the characteristics of an earlier fertility god and became Shiva, part of the trinity, or trimurti, with Vishnu and Brahma.

If you like the work we have done on this Shiva page please tell your friends!
Help us out by Liking, Tweeting or Pinning this page

The Cult of Shiva

Shaivism, or Saivism, is one of the most popular Hindu cults. It embraces many theological practices, although all agree on three principles: pati. or God; pasu, or individual soul; and pasa, or bonds that confine the soul to earthly existence. The aim of Shaivites is to rid their souls of bondage and achieve shivata, the "nature of Shiva". They achieve this through ascetic practices and penances, with an emphasis on yoga and renunciation. Many Shaivites become wandering sadhus, or hold men. Shiavites mark their foreheads with three horizontal marks representing the three aspects of Shiva.

Shiva Hindu God of Destruction often wears a snake coiled around his upper arms and neck symbolizing the power he has over the most deadly of creatures. Snakes are also used to symbolize the Hindu dogma of reincarnation. Their natural process of molting or shedding their skin is symbolic of the human souls transmigration of bodies from one life to another.


The Hindu God Shiva often wears a snake coiled around his upper arms and neck symbolizing the power he has over the most deadly of creatures. Snakes are also used to symbolize the Hindu dogma of reincarnation. Their natural process of molting or shedding their skin is symbolic of the human souls transmigration of bodies from one life to another.

Thiruvalangadu, north of Madras, is associated with the dance contest between Shiva and his consort in the form of Kali. According to legend, Shiva danced vigorously, and to subdue Kali, threw up his leg in the rhythm of the dance. Being a lady, Kali could not repeat this feat and stood dismayed. This dance and the subjugation of Kali, are described in the hymns of the female saint-poet Karaikkal Ammai.

Shiva's female consort and wife is Parvati; because of his generosity and reverence towards Parvati, Shiva is considered an ideal role model for a husband. The divine couple together with their sons - the six-headed Skanda and the elephant headed Ganesh- reside on Mount Kailasa in the Himalayas.

The trident often held by Shiva God of Destruction represents the Hindu trinity of Brahma, Shiva, and Vishnu. It is also said to represent the threefold qualities of nature: creation, preservation, and destruction, although preservation is usually attributed to Vishnu.


As the destroyer, Shiva is dark and terrible, encircled with serpents and a crown of skulls.

Shiva often holds a trident, which represents the Hindu trinity of Brahma, Shiva, and Vishnu. It is also said to represent the threefold qualities of nature: creation, preservation, and destruction, although preservation is usually attributed to Vishnu.

The crescent moon Lord Shiva wears on his headdress, besides being a symbol of Kama the goddess of nightly love, also represents the bull, Nandi, a fertility symbol.


Shiva holds a skull that represents samsara, the cycle of life, death and rebirth. Samsara is a central belief in Hinduism. Shiva himself also represents this complete cycle because he is Mahakala; the Lord of Time, destroying and creating all things.

Lord Shiva, God of Destruction's vehicle, or vahana is Nandi (the white bull), whose statue can often be seen watching over the main shrine. The bull is said to embody sexual energy and fertility. Riding on its back, Shiva is in control of these impulses. 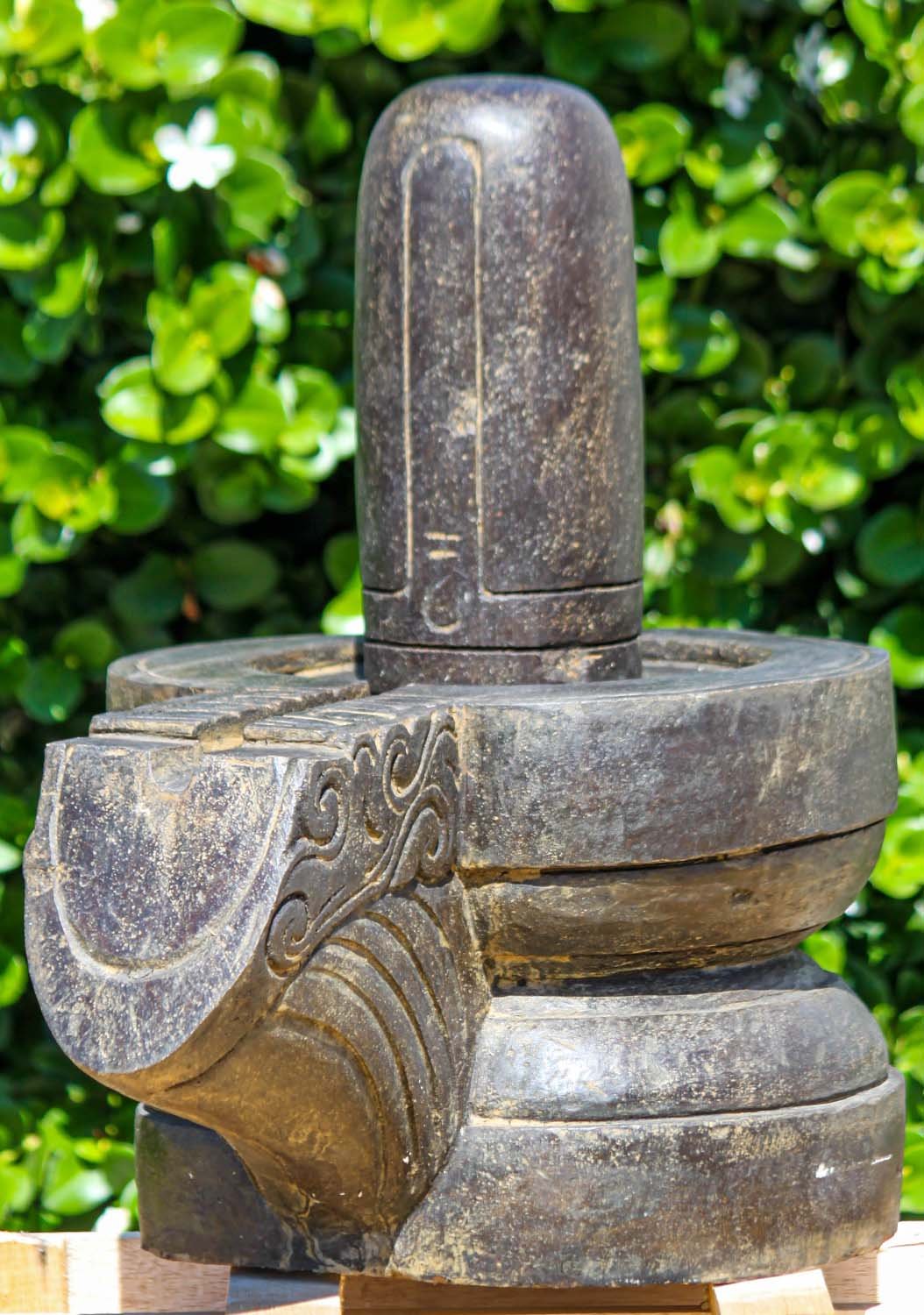 Shiva saw no sense in the transitory pleasures of life, so he rejected samsara, smeared his body with ash, closed his eyes and performed austerities.

Shiva's tapas generated so much heat that his body transformed into a pillar of fire - a blazing lingam that threatened to destroy the whole world. The gods did not know how to control Shiva's fire.

Suddenly there appeared a yoni - the divine vessel of the mother-goddess. It caught the fiery lingam and contained its heat, thus saving the cosmos from untimely destruction.

Shiva is often pictured in a pacific mood with his consort Parvati, as the cosmic dancer Nataraja, as a naked ascetic, as a mendicant beggar, as a yogi Dhakshinamurthy, and as the androgynous union of Shiva and Parvati in one body (Ardhanarisvara).

Shiva also takes the form of Ardhanari, his androgynous form. The right side of the sculpture is Shiva and the left side is Parvati. The attributes of each are split directly down the middle.

Another example of Shiva's apparent synthesis of male and female attributes is seen in his earrings. He often wears one earring in the style of a man and the other as a female.


Shiva is commonly depicted with a third eye. The third eye is a symbol of higher consciousness. It is also something with which he can destroy his enemies "with fire." He can also kill all the gods and other creatures during the periodic destruction of the universe. Shiva's third eye first appeared when Parvati, his wife, playfully covered his other two eyes, therefore plunging the world into darkness and putting it in danger of destruction.


Click Here To View All Of Our Shiva Statues

If you like the work we have done on this Shiva page please tell your friends!
Help us out by Liking, Tweeting or Pinning this page